Proof of vaccination as a condition of associating freely in public is already being tested by Big Tech companies.

“Smartphone developers are gearing up for a world where users can store their Covid vaccination proof in their phones’ digital wallets, making it easy to simply tap their phones when they enter new buildings,” Yahoo! News reported. “Google, Apple and Samsung have all recently announced plans to offer a feature that readily calls up a QR code that can be scanned to quickly verify a user’s vaccination status.” 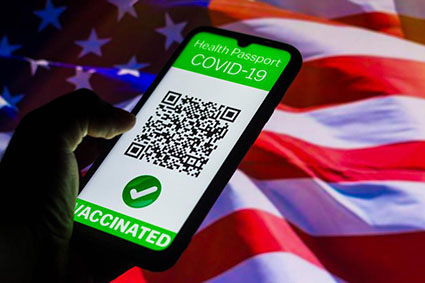 Washington Times columnist Cheryl K. Chumley noted on Aug 20 that, “once that electronic bridge is crossed, the once-dim potential for America’s government to track U.S. citizens moves to certainty.”

Chumley continued: “Just in the past couple of years, America has moved from the unthinkable to the accepted — from the idea of forcing citizens” to be vaccinated “to the idea that those who raise questions about the safety of this vaccine are branded unpatriotic, dangerous to society, needful of forced home quarantine.

“The only solution that saves for the long-term is to demand God-given rights, the ones founders forged for us all, the ones supposedly cemented in this nation’s foundation. That’s the only way to permanently stop this coming un-American tide of tyranny.”

On Monday, the Food and Drug Administration approved the Pfizer vaccine. Until Monday, it had been approved only for emergency use.

The FDA’s expedited approval of the Pfizer and BioNTech Covid-19 vaccines is problematic because it gives the appearance of politics trumping safety, warned Wisconsin Republican Sen. Ron Johnson in a letter to the federal government’s top health bureaucrats sent out just hours before the approvals were rendered.

“And with that comes yet one more reason American citizens should question-slash-fear vaccine mandates,” Chumley wrote in an Aug. 23 op-ed.

As Johnson wrote in his letter: “Since the vaccines have been made available, the Centers for Disease Control and Prevention’s Vaccine Adverse Event Reporting System, or VAERS, has filled 12,791 deaths associated with the shots, 4,632 of which resulted in fatalities either on the day of vaccination, or within two days of taking the vaccine. That’s not to definitively say the vaccines caused these deaths. But doesn’t that warrant further study?”

“But watch and wait, look and see. The vaccine mandates are about to come like a tidal wave.”

It’s already happening. On Monday, the Pentagon announced it will move to mandate the Covid-19 vaccine for all service members now that the Pfizer vaccine has full approval from the FDA.

“It’s shot or nothing; obey the government or suffer the consequences. And the willingness of Democrats and leftists to dangle freedoms as a condition of taking the vaccine in the faces of fearful and desperate citizens who want nothing more than a return to normalcy — well, it’s deplorable, that’s what it is. It’s government corruption-meet-government-usurpation at its worst.

“This coronavirus has been nothing but a boon for Big Government types to take over areas that better belong — that rightly belong — in the hands of the people. It’s a new world for America. Liberty lost is becoming our new national motto.”