The FBI has deployed agents from all but one of its 56 field offices to hunt down those suspected of participating in the breach of the U.S. Capitol on Jan. 6.

The bureau is pulling agents off cases involving drug trafficking and child pornography to instead take calls from the “angry ex-wives and former girlfriends and employers” of alleged rioters, USA Today reported last week. 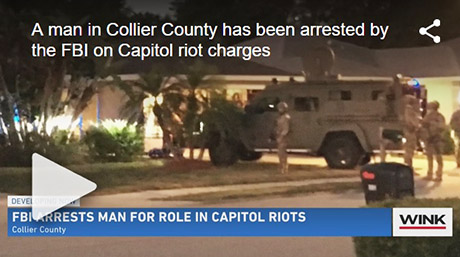 About 300 suspects have been arrested, but as many as 500 remain at large, the report said.

After critics charged the agency was “feckless“ in warning about Jan. 6 or in evading accountability especially following the politicized “Russia collusion” investigation targeting Republican President Donald Trump, the FBI under the Biden Administration has come alive.

The FBI “is focusing its full attention on the people who entered the U.S. Capitol on Jan. 6,” Gateway Pundit’s Jim Hoft noted. “They are hunting down Americans who walked through the People’s House,” many of whom “were waved in by the Capitol Hill police.”

Gateway Pundit has reported extensively on the tactics the FBI is using to hunt down these Americans.

Retired Army Sgt. Kenneth Harrelson, a Florida resident, was arrested last week and is currently being held in jail for attending the Jan. 6 rally in Washington, D.C.

My name is Angel. I am the wife of Retired Army Sgt. Kenneth Harrelson, a 100% disabled veteran, who traveled to Washington D.C. to on Jan. 5-6, to protect Trump supporters from violent Antifa. We have a 17-year-old son and a 14-year-old daughter. My husband was arrested on Wednesday, March 10th, 2021 and my family is greatly in need of help. The FBI, city police and sheriff’s office came to our home and executed a search warrant. My husband was on a ladder cleaning the gutters at the time and I was inside working virtually at my job. The agents and officers approached with their guns pointed at my husband. He was unarmed and was in fear for his life. They arrested him without incident and then came to the door with my husband in handcuffs.

I was on the phone with a customer at the time. I immediately hung up and then notified my boss that I needed to be excused from work for the day due to a family emergency. The agents informed me that they were going to search the house and said that I would need to remain outside for the duration of their search. I requested to see a copy of the search warrant but I was refused, basically. They proceeded to escort me outside of my home. I was upset that my things were going to be tossed around everywhere and that they would make a huge mess. They even tried to search through my photo album of my recently deceased Mother’s photos, until I begged them not to.

I decided to video record them while they conducted their search and I let them know that I was recording. They started questioning Kenneth but he requested a lawyer and so questioning ended and they then transported him to the county jail. I stayed at home to await the arrival of our children from school. After they completed their search, they gathered their “evidence,” which included absurd things like our son’s Air-soft flash-bangs and Air-soft “grenades” that he uses to play Air-soft with his JROTC school friends. They also took a tourniquet that we keep on hand, along with other first aid supplies. I was formally trained as an EMT and as a Certified Nursing Assistant, therefore, I keep this kind of supplies on hand at all times. They also took my personal iPad. All of these things were here at home while Kenneth was in Washington, D.C. and have nothing to do with his trip there.

Angel Harrelson said the cost for retaining a lawyer would amount to about $2,500 and that, if Kenneth Harrelson is charged with a felony, legal fees could exceed $100,000.

According to an affidavit she was provided with, Angel Harrelson said investigators mentioned “Go To Meetings that Kenneth participated in. The discussions that took place on those calls were about things the members could do to protect people from harm, specifically from violent Antifa. There was no conspiracy to harm anyone, only to protect people. The Oath Keepers have spent the past few months discussing ways to keep their communities informed about the violent activities of the BLM and Antifa groups, and also prepared to defend their neighborhoods and homes from invasion by those often violent extremists.”

The Oath Keepers, she said, “are made up of a diverse group of people; a variety of skin colors and races. They all have a common goal of defending the United States Constitution. Included in their mission is protecting and serving the community. They have spent countless volunteer hours helping with natural disasters cleanup and getting food and supplies to people in need. They They also protect people at rallies, and that is why my husband traveled to Washington D.C.

“The Oath Keepers are not terrorists. I pray that the truth will eventually set them all free.”

On March 14, Gateway Pundit reported on the case of another Florida resident, Christopher Worrell, who faces charges related to the Jan. 6 breach of the Capitol.

Related: From J. Edgar Hoover to James Comey: How the FBI morphed into a ‘proto-KGB’, December 6, 2017

“A quiet and peaceful neighborhood in Collier County was turned upside-down when armored vehicles and what appeared to be military personnel swarmed the neighborhood in a pre-dawn raid,” the report said.

The FBI said authorities received a tip from an acquaintance of Worrell’s girlfriend that he had traveled to D.C. to attend the Jan. 6 rally. Worrell said he never went into the Capitol building and never committed a crime.