Twitter board, which implemented ‘poison pill’ to stop Musk, owns less than 1 percent of company stock

Twitter’s board decided on Friday to implement a so-called “poison pill” strategy in an effort to stop Elon Musk’s $43 billion bid to buy the company.

It turns out that, other than Jack Dorsey (who plans on leaving the board later this year), Twitter’s board members own less than one percent of the company’s stock. 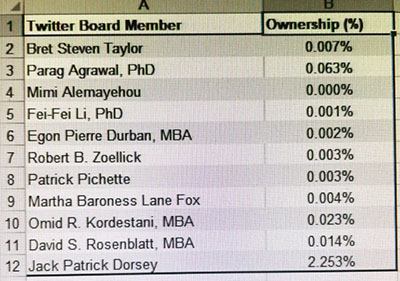 Despite their low ownership stake, the board has rejected Musk’s offer to buy the company at a premium and employed the “poison pill” strategy if any one shareholder gains more than 15% ownership. Musk’s current holding is said to be a little north of 9% while the index fund Vanguard holds slightly more.

“Twitter’s poison pill strategy would flood the market with newly issued stock. While this would devalue its individual shares, and possibly trigger a Musk sell-off which could crater the stock, it could also help resist Musk’s takeover,” Cullen McCue wrote for National File on April 17.

Beyond Dorsey, who owns 2.25%, current CEO Parag Agrawal holds the next highest ownership stake with 0.063%.

After Agrawal, not one member of Twitter’s board holds more than a quarter of one percent of the company’s shares, according to a spreadsheet shared on Twitter by businessman Chris Bakke.

“Wow, with Jack departing, the Twitter board collectively owns almost no shares!” Musk wrote in reply to Bakke’s tweet. “Objectively, their economic interests are simply not aligned with shareholders.”

On Thursday, Musk offered to buy the remaining shares of Twitter that he doesn’t already own at $54.20 per share, an offer worth more than $43 billion. Twitter has traded in the 30 to 50-dollar range almost exclusively over the last five years.

Musk has said he has a “Plan B” if Twitter’s board went through with the “poison pill” strategy. The Tesla CEO has in the past floated the idea of starting his own social media platform.

Musk “could also invite shareholders to bypass the board and sell their shares directly to him at a premium,” McCue noted, adding that “on Saturday, Musk tweeted the Elvis lyrics ‘love me tender’, seemingly putting this option on the table.”

Elon Musk is in for a bad time.

I’m not sure he’s prepared to take on a couple PhDs, a few MBAs, and a Baroness who use Twitter once a year (to reset their passwords) and collectively own 77 shares of the company. pic.twitter.com/sJmKwHbzVh

Twitter board, which implemented ‘poison pill’ to stop Musk, owns less than 1 percent of company stock added by Editor Two on April 18, 2022
View all posts by Editor Two →