Donald Trump may be his own worst enemy, but he has a great many others.

The entire Democratic Party, the professoriat, the talking heads, the professional leftists and almost the entire media in the U.S. loath him and in cooperation with the “deep state” of career bureaucrats and Obama holdovers are actively seeking his political destruction. Nothing short of his being driven from office will satisfy them. 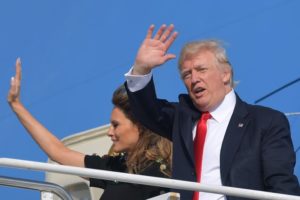 They have made a huge issue of his having fired former FBI director James Comey, something he had a perfect right to do as president and plenty of reasons to do it.

The hypocrisy level has reached screaming proportions on this issue, since if Hillary Clinton had been elected president, one of her first acts in office would undoubtedly have been to fire Comey, whom she blames for her defeat.

The other flaming issue is what Trump did or did not tell Putin about Islamic State. This is less than a tempest in a teapot — more like a thimble. The idea that sources and methods were revealed by the president has been shot down, and now even the claim that the information came from the Israelis has come into question, with Jordan declaring that it, not Israel, was the source of the intelligence.

This concerted campaign has already resulted in the gutting of the president’s domestic agenda, as witness the reception of his valiant attempt to turn back the tide of budget deficit and accumulated debt.

Keep the caution button on, because in today’s world, “news” is actively invented on a daily basis by all sides and the idea of an independent media objectively ascertaining and disseminating the “truth” has just about disappeared. Joseph Goebbels would be delighted.

The “anti-Trump” coalition was eagerly looking forward to the president’s first trip abroad, confident that it would be a disastrous failure and contribute greatly to the campaign to unseat him. But the actual results were a great disappointment, because nothing of the sort happened.

Trump’s visit to Riyadh was almost universally judged a success, with promises of cooperation to combat Iran, Islamic State, Al Qaida and the other terrorist organizations all around, and large weapons orders from the Saudis. (The Yemen war, of course, is a demonstration of the fact that quantities of weapons are distinctly less important than how effectively they are used, and given that criterion, the Saudi war capabilities are highly questionable, no matter how many toys it has that go “boom”. But a dollar in exports is, after all, a dollar.)

Jerusalem was also a success. It was widely reported that thanks to encouragement by Ronald Lauder, Trump decided to follow his White House predecessors of the past quarter-century on the fool’s errand of jumping into the morass of Israeli-Palestinian “peace” negotiations; but in Israel he did not so much as mention a two-state solution, Palestinian sovereignty, or settlements, and his meetings in Riyadh showed that he has resisted diverting his attention from the much more important task of putting together a meaningful alliance of states to confront Iran and the terrorists and bring Israel into the alliance.

Still, it will be back to the “negotiating” table, undoubtedly, and that meaningless but time- and resource-consuming effort has already resulted in the American embassy not being moved to Jerusalem, exhortations to cease building in the West Bank, and a package of goodies being prepared for Abbas and the other 39 thieves (Ali Baba would be proud).

It used to be said that the Palestinians never missed an opportunity to miss an opportunity. That maxim will be justly applied to the new administration if it allows itself to concentrate on Israel-Palestine rather than a regional alliance, and if that turns out to be the case, the administration will have ever-weaker protection against the jackals and hyenas circling it in Washington.

If not, and if Trump succeeds in promoting the formation of a coalition including Israel to confront the Middle Eastern “axis of evil”, he will indeed have forged a major strategic triumph. We shall see; but for the moment, we can be unexpectedly (and cautiously) optimistic.

Donald Trump, Hillary Clinton, James Comey, Trump triumphant on first foreign tour to the disappointment of his many enemies back home, WorldTribune.com