What does chaos theory have to do with Donald Trump and are both just what America needs at this moment in history?

In his Sept. 29, 2015, article, Mark Leibovich of The New York Times Magazine refers to the Republican presidential candidate Donald Trump as “a kind of one-man chaos theory at the center of a primary campaign in disarray” and “the blazing chaos of Trump.” 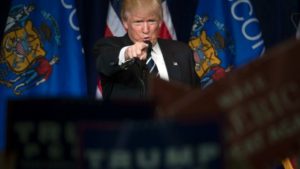 Despite the Right and Left political Establishments’ wanting him to go away, Trump is leading in every poll. He dominates the Mainstream Media not only by being the main topic of the day for months, but by delivering the best ratings in recent times for any show on which he appears.

In the past couple of decades there has been an unsettling feeling that America is not headed the right way, and that demoralization or the inability to distinguish light from dark (good from bad) is spreading across various levels of the American society. Of course, for someone like me who focuses on Iran’s affairs and first noticed the spread of Darkness with the fall of the modernizing and secular Pahlavi dynasty in 1979 to an Islamic theocracy under mullahs (priests), it has been an uncomfortable feeling to see the signs of Darkness spreading across the miles to America.

President Barack Obama claimed he would fundamentally transform America. Despite opposition from among a large portion of the citizenry and their voting in a majority Republican Congress as opposition, Obama managed to get his desired changes through rather effortlessly and not with the chaos which would come later.

Will it now take chaos to replace the chaos that he so smoothly and relentlessly achieved with his willing accomplices in the Washington ruling class and their media?

The American people had to experience two Obama presidential terms in voting for a Republican majority Congress to represent them against the policies that were unpopular and, in some cases, antithetical to the American way. The Republican Establishment has unfortunately served mainly as the “controlled opposition” as a series of un-American and unpopular measures have been adopted one after another.

Are Americans and Republicans in particular hypnotized? Have they fallen under the mind control of dark forces?

The reason Truths are painful and Denial is powerful is because people do not like to find out that they have been misled or fooled.

How else could the Obama Administration have been so successful in defying the majority of the American citizens in pushing through policy after policy such as Obamacare and attacks on religious freedom?

Obama did not bring fundamental transformation to America, because he did not change anything. He simply turned the “on” button for many unpopular policies that had already been put in place awaiting activation.

That is, by the time Obama was sworn into office in 2008, America had been on a path to demoralization, weakening of its Constitutional faculties, dumbing down of its brave and friendly people unbeknownst to them, loss of its exceptional and unprecedented citizen freedom, self-hate for its unique history and foundation, and zombification of its taxpayers in footing the bills for enriching the globalist ill-doers since the fall of Iran in 1979. It is a pattern that is very clear in hindsight.

If, according to The New York Times Magazine, Trump is now an example of chaos, it is because he is an “equilibrium buster” – a term described by consultant and co-founder of The Berkana Institute Margaret Wheatley in her writings on chaos and order.

Even Trump himself does not know where all of this will lead as far as his bid for the presidency, but give him credit for this: He has broken the American political system that has obviously gone off the rails, a fact which is weighing heavily on the American people and psyche.

In Trump’s having shown the corruption in the American politics, the lack of morals in a society that claims to have risen and continues to rise above the Dark Ages of human civilization, and how hopelessly unhinged the American institutions and Mainstream Media have become, can anyone look at and consider future political campaigns and candidates in the same way?

Such is the transformation the Trump chaos makes possible and which has captured the imagination of many Americans who had lost hope.

Sheda Vasseghi is a doctorate candidate, historian, and educator specializing in Iran (Persia). She is a member of Azadegan Foundation in Washington, D.C.