The Left is out to “silence opposing views” by unleashing an avalanche of stories and lists on “fake news” and how it supposedly influenced the 2016 presidential election, columnist Kelly Riddell wrote on Nov. 24. 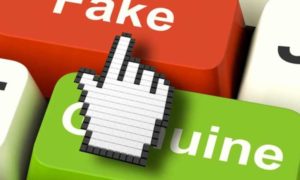 “None of those sites are fake — they often just peddle in the real news purposely not covered by the mainstream media.”

“Not all of these sources are always or inherently problematic, neither are all of them fake or false,” Melissa Zimdars, a professor at Merrimack College in Massachusetts told The WashingtonTimes columnist. “They should be considered in conjunction with other news/info sources due to their tendency to rely on clickbait headlines or Facebook descriptions, etc.”

Riddell continued: “So, just like MSNBC, Huffington Post, Slate, Mother Jones, and ThinkProgress — all partisan left outlets, which often use exaggeration and hyperbole to emphasize their point — which weren’t included” on the list.

“Breitbart is anti-media. Much of Fox News is anti-media. Fake news websites and some right wing blogs are anti-media. These outlets provide a different audience with a different set of facts about the world. But too often what they’re really selling is opinion and conspiracy theory masquerading as fact. These sites, these outlets, they present themselves as the opposite of traditional news sources, the antidote to mainstream media,” Stetler said.

Riddell countered: “What he’s right about is there does need to be an antidote to the mainstream media. Because often what he — and other newsrooms around the country — view as “opinion and conspiracy theory” are all too often real news stories that simply don’t fit their agenda.”

Meanwhile, Riddell noted, when Nebraska Sen. Ben Sasse asked on Twitter after the election, “why wasn’t there more reporting on the anti-Trump protests — like who they were organized by and if they were paid for” — the Washington Post’s Phillip Bump took offense.

“Sasse’s question is a bit like asking why we don’t have more reporting on the fact that the Moon is preparing a superweapon with which to annex Antarctica,” Bump wrote, in an article titled: “Sen. Sasse here are some answers to your questions about ‘paid rioting.’”

When confronted on Twitter about his lack of intellectual curiosity from a reader, Bump responded: “Allow me to reply in a way you’ll grasp: derp, derp, derp.”

“So yes, we need an antidote to this sort of media,” Riddell wrote. “None of it is fake — it’s merely doing the job the mainstream media refuses to do.”