Back in 1887 the famous poet and storyteller Oscar Wilde quipped: ‘We [English] have really everything in common with America nowadays except, of course, language’.

We got another example of this malediction in the blah-blah-blah which has attended Britain’s decision to leave the European Union.

What is most apparent to all but the Talking Heads is that London’s negotiating a two-year exit from the EU will result in a revival not only of the vestiges of empire – as much legend as reality – but a renewed emphasis on the Anglo-American alliance, “the Special Relationship”. 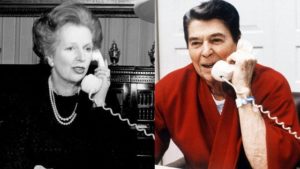 Like so much of traditional diplomacy, President Barrack Obama and his former secretary of State, Hillary Clinton, gave that relationship short shrift.

Obama, imbued with the Left’s religion of anti-colonialism – a view of the world which is not only unrealistic but ignores the actual relationship of the Metropoles of Britain, France, Italy, and once Germany, to their 19th centuries acquisitions. True, they were exploitative relationships but they also accelerated the arrival of at least portions of modernism to pre-industrial societies.

As Obama’s attempts to “transform” American foreign policy have either miscued or collapsed over the last seven-plus years, his attempt to derail the historic relationship between the U.S. and Britain has also gone astray.

Common language, shared democratic values and concepts, special interests throughout the work, have made a working relationship between Washington and London an irreplaceable part and parcel of U.S. internationalism.

The combination of Obama’s war on this tradition, his buffoonish attempt to influence British voters on withdrawal from the EU which boomeranged, and the U.S.’ expanding interests in the post-World War II world have tended to eclipse that relationship.

That illusion was enhanced when London seemed to be throwing in its lot with the movement for a united Europe, one which had been a special project of American strategy for a half century, but not always with its final destination in view.

Now, the latter project is in deep trouble. Few Europeans want to face the reality of German domination as by far the largest and economically the most powerful of the EU states. That will halt the perfectly “logical” calls by Berlin that the EU must go forward to further political integration or collapse.

But the French, once Germany’s twin partner in European unity, in a miraculous and real transformation, are for the first time abandoning dirigisme.

French promotion of economic planning and control by the state, under the pressure of the competitive drive of “globalization” is being abandoned – and that under a socialist government!

The concept had defined the distinctive character of French politics, inherited in part from its royal and multi-republican past, and which it had passed on to the same Brussels Eurocrats it had largely supplied and still dominated.

London ‘s withdrawal — although it will continue to bargain for special trading and other economic rights inside the EU, whatever it means in the short-term — means a return to Britain’s diminished but continuing role as a world economic power.

The good sense and good luck that kept Britain out of the EU’s now faltering monetary union means that once again, in parallel with the dollar, sterling will resume an stronger international character.

London’s City, which was ceding its role to Frankfurt and Zurich, will be reinvigorated in the longer term by the British withdrawal. That role of London as the world’s second financial center after New York will be felt all the way through the Middle East oil countries [with their traditional ties to the Colonial Office] to Hong Kong and beyond.

[What the Japanese will do with their heavy investments in British manufacturing as a base for the EU remains to be seen. But it would not be the first time that Japanese business has had to make major adjustments to its successful formula for being the only non-European power to have made it to First World status].

The revival of the Special Relationship will have new and totally different aspects – again, despite Obama’s original high-priced energy policies, the U.S. and its Shale Revolution has put a new floor under world energy prices. It is one the Mideast producers can meet, of course, but not without cutting back on their enormously spendthrift policies of the past.

It could well be that Special Relations II will see the U.S. as Britain’s major supplier of energy and energy technology for development of its own shale resources, environmental freaks notwithstanding.

Prime Minister David Cameron may have to go as a sacrifice on the altar of City business interests and the universal “internationalization” panacea which has dominated both U.K. and U.S. politics under his Conservatives – as well as the Democrats in Washington. And that may introduce new uncertainties along with some disturbing personalities.

But the dye is cast: Special Relationship II has begun with the British voters’ decision that they wanted autonomy and not collaboration at too high a price in cultural values with a Continental bureaucracy and its economy

That bureaucracy, too, is now fatally wounded and events will lead to new and likely unpredictable changes in Paris, Berlin, Brussels and the other EU capitals.

Brexit, EU, Eurocrats, Sol Sanders, The die is cast: Brexit will revive the ‘Special Relationship’ and sink the Eurocracy, WorldTribune.com