That other election: The metrosexual male vs the teetotaller square

There is another parallel shadowy election tomorrow – no candidates, no poll counting, and no definitive victory or defeat. It’s the little acknowledged cultural war playing out, a fierce contest hardly talked about publicly – at least not identifying it with each candidate.

Mr. Romney, to a considerable extent represents traditions as expressed publicly as well as privately, inherited largely from at least one generation past. President Obama epitomizes the supposed contemporary sophistication, a lifestyle cultivated by the elite and carrying the imprimatur of the media and the rest of the popular culture. 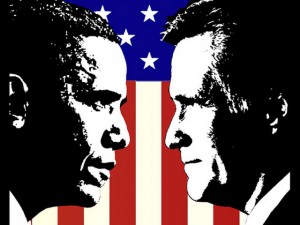 In fact, Mr. Romney is quintessential: although belonging to what once some would have considered an exotic religion [even though perhaps more “American” than any other], he represents old values. In a country where almost half first marriages fail, childhood sweethearts, the Romneys celebrate almost half a century together. The average family household finds less than one child but the Romneys have five sons. Mrs. Romney, for all her political flowering in this campaign, is a stay-at-home mom when less than a quarter of mothers with children under 15 are.

Then there are private conceits: as Romney quipped, he prepared for the campaign rigours by being a teetotaller all his 65 years and smoked only briefly in his youth. His speaking style with its frequent hesitancies is archetypical of an older generation – long before hip-hop – even when grade school taught elocution. In any case, his language is generally restrained; it’s news when he uses current slang or jokes. He is square.

President Obama comes from a mixed ethnic background and a troubled childhood all too reflective of too many current dysfunctional families. Although in a seemingly close marriage, he has catalogued extended earlier sexual affairs. He has almost bragged about his encounters with drugs and poor scholarship as a young student. Like too many Americans his smoking addiction has apparently still not been broken.

Mr. Obama is the model of the metrosexual male, an accomplished speaker with a quick witted comeback in any situation. He exults in his appearances on the late evening talk shows where his opinions on any and every subject are those acceptable to a younger public. His base following would see no “big deal” in his having used profanity to describe his opponent on a late night show.

Unlike Gov. Romney, President Barack’s career bounced along an uneven track. His choice of becoming a “neighborhood organizer” after he rejected a start in corporate law contrasts sharply with Mr. Romney’s almost straight-line ride up the business escalator. The President’s gruelling search for identity dramatized in his two autobiographical works suggest a real and continuing emotional crisis throughout his youth. Unlike Romney who served obligatory missionary service for his church, tithes heavily to its coffers, and was a leading member of its hierarchy in Massachusetts, President Obama wears his religion lightly even if attending a radical Black Nationalist church for two decades.

Most voters will go to the polls, believing sincerely and probably correctly, they are voting only on issues. Many, of course, will be voting from their old loyalties to a major political party. But it seems certain they also will be choosing, if subliminally, between two lifestyles, two very different polarities of the American social scene.

That doesn’t mean there won’t be contradictions. A young woman college graduate unable to find a job fitting her professional training might cross the line from Mr. Obama’s more fashionable attitudes toward contraception and abortion [although recent polls have shown a general movement toward more conservative positions on abortion]. Equally possible, a small business woman favorable to Mr. Romney’s economic remedies might go to Mr. Obama just because of these same feminist attitudes.

The cultural wars won’t be decided, of course, in this election. The battlelines are too high but too crisscrossed with contradictions and hypocrisy to even be clearly identified. But the president of the U.S. does have an important and consequential role as symbol of the nation, especially in time of crisis. And with the strong possibility of continuing economic disarray and an exploding international scene, his demeanor and his own persona will be an important ingredient in that role in future events.

That other election: The metrosexual male vs the teetotaller square added by Editor One on November 5, 2012
View all posts by Editor One →