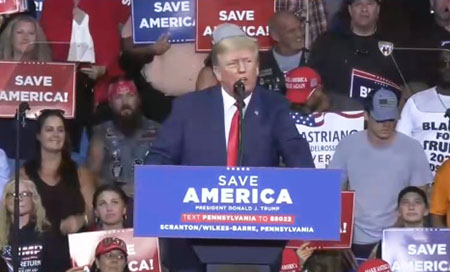 by WorldTribune Staff, September 4, 2022 Speaking to massive and energized crowd of what his last two opponents would call “deplorables” and “semi-fascists” in Wilkes-Barre, Pennsylvania on Saturday, former President Donald Trump slammed Joe Biden’s speech on Thursday as the “most vicious, hateful and divisive speech ever delivered by an American president.” “Our Country is […]

by WorldTribune Staff, October 29, 2020 Following is a Facebook post by Omaha resident Eugene Curtin, who attended President Donald Trump’s Oct. 27 rally in Nebraska: Check out this total bull poo-poo from Joe Biden: Biden said of Trump’s Omaha rally: “Just look at what happened last night in Omaha after Trump — after the […]