In order for the Green New Deal to become reality, a new study says Americans should prepare to pay. A lot. In perpetuity. 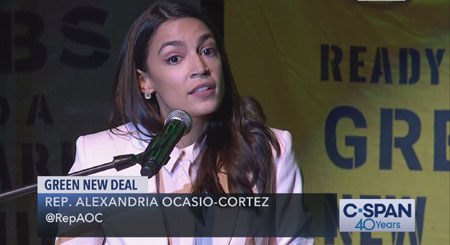 The plan Democratic socialist Rep. Alexandria Ocasio-Cortez introduced in February calls not only for replacing fossil fuels with renewable energy, but for state-sponsored jobs, universal health care and an increased minimum wage.

A new study by researchers at the free-market groups Power for the Future and the Competitive Enterprise Institute (CEI) found that American households on average would pay tens of thousands of dollars each year for the Green New Deal.

“Our analysis shows that, if implemented, the Green New Deal would cost for American households at least tens of thousands of dollars annually on a permanent basis,” said CEI President and CEO Kent Lassman. “Perhaps that’s why exactly zero Senate Democrats, including the resolution’s 12 co-sponsors, voted for the Green New Deal when they had the chance.”

The study said that in five model states — Alaska, Florida, New Hampshire, New Mexico and Pennsylvania — the Green New Deal would cost each household $70,000 on average in the first year alone.

Alaska would experience the highest cost increase — $100,505 per household in the first year, dropping to $73,092 in years two through five, and $67,536 in the sixth year and thereafter, the study said.

“Economists and experts have been warning us for months about the devastating effects of the Green New Deal, and now we have the numbers to prove it,” said Daniel Turner, executive director of Power the Future. “This study only calculates a fraction of the cost of Alexandria-Ocasio Cortez’s radical plan, which amounts to a socialist free-for-all with no regard for the American taxpayer.”