A California district attorney, who was swept into office thanks in large part to a cash infusion from leftist billionaire George Soros, has charged a couple with a hate crime for painting over a “Black Lives Matter” mural on the road. 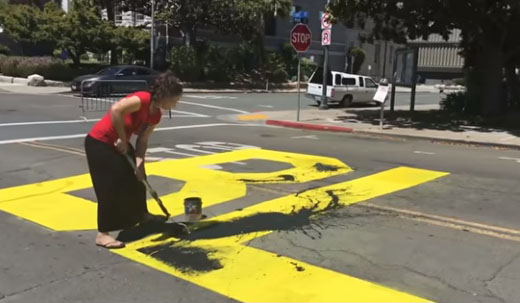 Soros spent roughly $50,000 in support of Becton in 2018 through the California Justice & Public Safety Political Action Committee. She won a narrow victory and was one of the only successes Soros enjoyed in DA races in California that year, when he backed “progressive” prosecutors against establishment candidates, Breitbart News noted.

The press release says: “On July 1, a local Martinez resident applied for a permit to paint a Black Lives Matter temporary mural in downtown Martinez in front of the Wakefield Taylor Courthouse. The permit was approved by the City of Martinez and the painting was done on July 4.

“Nelson and Anderson arrived at the scene of the mural after it was completed with paint supplies. Anderson started to paint over the yellow letters ‘B’ and ‘L’ in the word ‘Black.’ She used black paint and a large paint roller to do so. The video has been shared widely by witnesses and shared on social media.”

In fact, after the video was shared on social media leftist media and activists targeted Anderson and Nelson for “doxxing,” asking for and then publishing their personal information.

“I said no one wants Black Lives Matter here!” he added. “That’s what I said. All lives matter.”

Becton stated in a press release: “We must address the root and byproduct of systemic racism in our country. The Black Lives Matter movement is an important civil rights cause that deserves all of our attention. The mural completed last weekend was a peaceful and powerful way to communicate the importance of Black lives in Contra Costa County and the country. We must continue to elevate discussions and actually listen to one another in an effort to heal our community and country.”