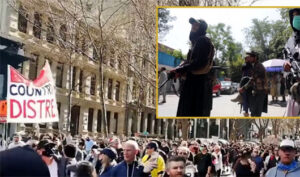 As Australia continues to brutally enforce a total lockdown on their own citizens, the increasingly desperate population has reached out to the Taliban and begged them to come and liberate their country.

“If only those brave mujahadin fighters could ride in on their American tanks and Humvees, armed with American weapons, and liberate us all,” said local woman Charlotte Menda. “I mean, they aren’t perfect, but at least people can go shopping and walk their dog under Taliban rule. Anything would be better than this, right?” ….

Australians [sent an envoy] to Kabul to ask the Taliban army to overthrow their tyrannical government and usher in an age of slightly less tyranny.