Newly released documents “unequivocally” show that Dr. Anthony Fauci lied about the U.S. government issuing grants that were used to fund gain-of-function research at the Wuhan Institute of Virology, a scientist said. 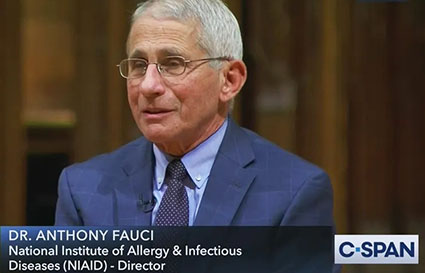 Richard Ebright, board of governors professor of chemistry and chemical biology at Rutgers University and laboratory director at the Waksman Institute of Microbiology, told Newsweek the documents obtained by The Intercept “make it clear that assertions by the NIH director, Francis Collins, and the NIAID director, Anthony Fauci, that the NIH did not support gain-of-function research or potential pandemic pathogen enhancement in Wuhan are untruthful.”

Fauci has continually denied in testimony before Congress that the NIH and NIAID funded gain-of-function research at the Wuhan lab, which involves modifying a biological agent, like a virus, so that it becomes more active.

The research on influenza or coronavirus viruses has been “the subject of substantial scrutiny,” by the NIH’s own admission, as it potentially makes the virus more dangerous to humans.

“Multiple sections of the grant proposals and grant progress reports make it clear that the grants funded gain-of-function research of concern in Wuhan,” Ebright said.

Ebright said these sections of the documents show that NIH grants supported the construction of mutant SARS-related coronaviruses that involved blending different types together. The result was a lab-generated virus that could infect human cells, he said, adding that at least three of the lab-generated viruses “exhibited >10x to >100x higher viral loads in humanized mice.”

The question is whether this work on humanized mice constitutes gain-of-function research on a coronavirus that would make it more dangerous to humans. Ebright says it does.

Arkansas Republican Sen. Tom Cotton called the revelations that Fauci appeared to have lied to Congress “one of the biggest scandals in Washington” and said the infectious diseases expert “should be investigated and prosecuted to the fullest extent of the law.”

“You know for 18 months he’s been saddling up his moral high horse and plucking his tongue at college kids who want to go celebrate a football game at an outdoor stadium on a nice fall day or parents who don’t want their kindergartners to have to work masks their entire lives, telling you you have to work very mask, when all along, he’s been lying, not just in Congress, but to the American people about his role in funding the very reckless and dangerous research at a Chinese Communist lab that unleashed this pandemic on the world,” Cotton told Fox News host Laura Ingraham on Tuesday.

“It is a disgrace, and it’s time for Tony Fauci to be held accountable,” Cotton said.