An emotional North Korean defector, who walked thousands of miles on crutches through Southeast Asia to escape his homeland, kept the crutches to remember his ordeal and waved them aloft as President Donald Trump hailed him during the State of the Union address on Jan. 30.

Ji Seong-Ho was a guest in first lady Melania Trump’s gallery box as Trump said “We are joined by one more witness to the ominous nature of this regime.”

“One day, he tried to steal coal from a railroad car to barter for a few scraps of food,” Trump explained. “In the process, he passed out on the train tracks, exhausted from hunger. He woke up as a train ran over his limbs.”

Ji, who lost a leg in the process, now has a new prosthetic leg, but he uses the crutches as a symbol of how far he’s come, Trump added. 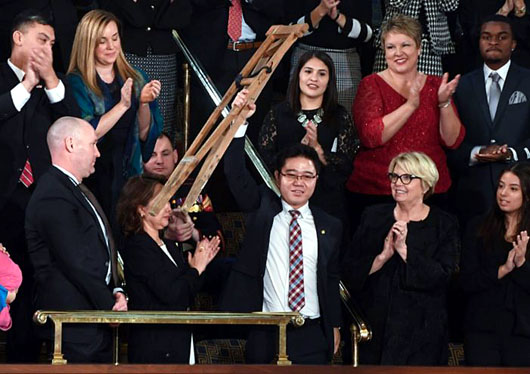 “Later, he was tortured by North Korean authorities after returning from a brief visit to China,” Trump continued. “His tormentors wanted to know if he had met any Christians. He had – and he resolved to be free.”

Ji now lives in Seoul, South Korea and has dedicated himself to helping other North Korean defectors. He studies law at Dongguk University and serves as the president of Now Action and Unity for Human Rights, a position that allows him to broadcast into North Korea “what the regime fears the most – the truth,” Trump said.

“No regime has oppressed its own citizens more totally or brutally than the cruel dictatorship in North Korea,” Trump said. “North Korea’s reckless pursuit of nuclear missiles could very soon threaten our homeland. We are waging a campaign of maximum pressure to prevent that from happening.”