Revelation: Poll finds 3 of 4 Americans talk to God and God talks back to 1 in 4

A new Pew Research Poll found that 75 percent of Americans say they talk to God – and 28 percent say God responds. 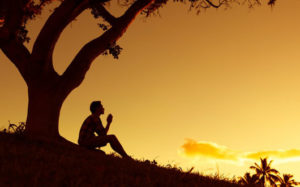 The poll also found a decline in the number of Americans who believe in the God of the Bible.

The poll also found: “In the U.S., belief in a deity is common even among the religiously unaffiliated – a group composed of those who identify themselves, religiously, as atheist, agnostic or ‘nothing in particular,’ and sometimes referred to, collectively, as religious ‘nones.’ Indeed, nearly three-quarters of religious ‘nones’ (72 percent) believe in a higher power of some kind, even if not in God as described in the Bible.”

Most respondents who believe in the Biblical God said God is very rewarding:

God of the Bible, higher power, Pew Research, Revelation: Poll finds 3 of 4 Americans talk to God and God talks back to 1 in 4, WorldTribune.com