Reporter’s notebook: What’s ‘newsworthy’ in 2020 and what’s not 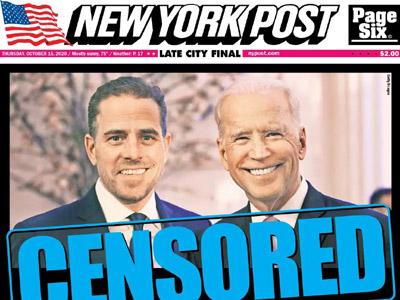 3. Hunter Biden laptop. Contents confirmed. Demanded $10 million a year from Chinese tycoon for “introductions alone.” At least one meeting with dad arranged for a Ukraine oligarch rep. Liberal media covered by saying laptop a Russian plot. That’s what Obama-appointed intel people said, without evidence. Talk among Hunter partners of cutting Joe in on deal. No reporter has asked Biden if he received proceeds from son, as alleged in messages.

4. Hunter acknowledges he is under federal criminal investigation for possible tax fraud. Notified by U.S. attorney. Generally, for it to reach that stage something serious is alleged. Liberal media generally ignored.

Meanwhile, Congress’s $1.4 trillion omnibus spending bill is the “Swamp’s” annual masked ball. Lobbyists, law firms, PR maestros, consultants (all political donors) get fat around the holidays by plugging in millions of dollars for clients, foreign and domestic. It’s how the town’s wealthy establishment gleefully operates. It will not tolerate any president who challenges its power and tries to curtail the government cash flow.