Report: As NYC mayor, Bloomberg’s money allowed him to ‘drown out’ the opposition

Michael Bloomberg is worth an estimated $56 billion. He spent a record $261 million on his three successful campaigns for mayor of New York City and is pumping millions more into his long-shot run at the 2020 Democratic presidential nomination.

“Bloomberg’s critics on other campaigns warn that his money blinds him,” Edward Isaac Dovere wrote in an analysis for The Atlantic last month. 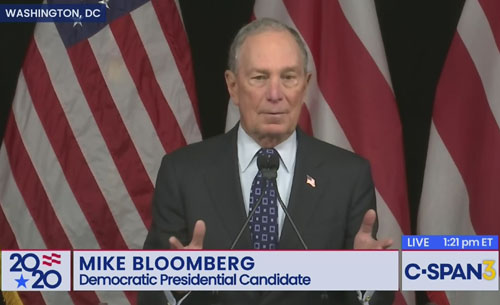 “They say that living in a moneyed bubble led him to choose as leader of the New York public schools a magazine executive he knew from Upper East Side cocktail parties who had never attended public schools and sent her sons to boarding schools. She lasted 95 days and generated multiple scandals, including one caused by her saying that the way to bring class sizes down was through birth control.”

While mayor of New York, Bloomberg spent large out of his own bank account on politicians and organizations which backed his policy agenda, including his all-out attack on the Second Amendment.

Dovere noted that “When church groups or community organizations threatened to get noisy in opposition to him or his programs, he wrote checks that tended to quiet them down. (Top Democrats were known to tease black ministers who got only $25,000 for their churches, when peers who’d held out longer received $50,000 — the deal was that these ministers didn’t have to support him, but if they wanted the checks to keep coming, they needed to stay neutral.)

“His company, Bloomberg LP, made many corporate contributions that lined up with his political interests. The money kept coming and coming and coming and coming. It broke logjams, and overcame institutional resistance. His money allowed him to drown out the opposition — and often made potential rivals hold their tongue. The timely and balanced budgets Bloomberg touted each year in PowerPoint presentations were enabled in part by spending cuts to groups that were then made whole again by the most transparent of anonymous donations. The money he spent led to fewer protests, and deals that were easier to make.”

From covering paid-leave time for city workers to reducing the number of garbage trucks in the city, Bloomberg could use private money to underwrite it.

The former mayor “is so rich that he shifts the direction of potential influence: Donors may not be able to buy influence, but he can use his wealth to push things in the directions he wants,” Dovere wrote.

Bloomberg has been hailed as one of the most effective mayors in the history of New York City.

“How much of that perception,” Dovere wrote “is based on the money he spent on ad campaigns that promoted his anti-smoking and healthy-eating initiatives; or on flying state legislators to his home in Bermuda, where they golfed and often walked away with big checks for their re-election committees; or on funding education-reform groups that backed his efforts to seize control of the public schools from the state government? How much of what seemed to be his organic grassroots support can be traced, directly and indirectly, to outlays of cash?”

Bloomberg bought his way into the Democratic Party primary and said he could spend $1 billion of his personal fortune on the 2020 election.

One recent poll even had Bloomberg tied with Sen. Elizabeth Warren for third place.