Georgia election officials certified 43,907 absentee ballots from DeKalb County in the 2020 election despite the ballots being in violation of state chain of custody requirements, a report said.

A total of 61,731 absentee ballots were placed in drop boxes for the November election, meaning that 72 percent of them lacked chain of custody requirements “set forward in Georgia Emergency Rule 183-1-14-1.8-.14 promulgated by the Georgia State Election Board at its July 1, 2020, meeting,” Georgia Star News , which obtained 725 DeKalb County ballot drop box transfer forms via an open records request, reported on Aug. 30. 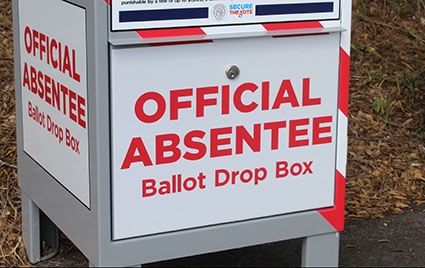 That rule states absentee ballots placed in drop boxes “shall be immediately transported to the county registrar” by the two person collection team, which is required to sign a ballot transfer form indicating the number of ballots picked up, the time the ballots were picked up, and the location of the drop box, and that, “The county registrar or a designee thereof shall sign the ballot transfer form upon receipt of the ballots from the collection team.”

According to the transfer forms obtained by Georgia Star News, 28,194 of the 61,731 absentee ballots DeKalb County recorded as being deposited into drop boxes during the November 2020 election were not documented as being received by the elections registrar or the director’s designee until the day after they were collected from the drop box.

“The range in which absentee ballots were collected from drop boxes in DeKalb County and documented as received by the registrar the next day was between 13 and 22 hours, or nearly a full day later,” the report noted.

For another 26 percent, representing 15,713 absentee ballots collected from drop boxes during the November 2020 election, there was no receipt time recorded at all by the elections office, as is required by the July 2020 emergency election code rule.

“Records for seven full days of the 29-day election period – nearly one quarter – including October 17, 18, 19, 20, 22, 24 and November 1, fall into this category,” the report said. “All told, 43,907 absentee ballots deposited in drop boxes in DeKalb County were counted in the certified results of the November 3, 2020 election despite being delivered to the registrar’s office in clear violation of the chain of custody documentation of the Georgia State Election Board’s July 2020 rule.”

Another 24 percent – 14,925 absentee ballots collected from drop boxes – were documented as received by the elections official more than an hour after being collected by a two-person collection team, but on the same calendar day.

“Arguably, these additional 14,925 absentee ballots could also be considered in violation of the election code rule that requires absentee ballots placed in drop boxes ‘shall be immediately transported to the county registrar,’ ” the report noted.

Less than 5 percent of the absentee ballots collected from drop boxes during the November 2020 election were recorded as being received by the elections official in an hour or less.

Issues surrounding the chain of custody of absentee ballots deposited into drop boxes in Cobb County and Fulton County have also been reported by The Star News.

“After Fulton County did not provide the chain of custody documents for 18,901 absentee ballots deposited into drop boxes, an election official there admitted that the records were missing. Additionally, 85 percent of the drop box absentee ballots were not ‘immediately transported’ and 5 percent were recorded as being delivered before they were picked up from the drop boxes,” the Star News noted.

Georgia Secretary of State Brad Raffensperger declared in an April press release that 120 of 123 Georgia counties that utilized drop boxes during the November 2020 election “filled out and retained ballot transfer forms in accordance with Georgia rules.”