Under nondisclosure agreements (NDAs) until now, Arizona residents who volunteered to take part in the audit of Maricopa County’s 2020 election ballots are speaking out. 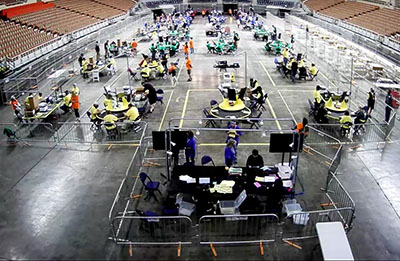 In a newly released video, the auditors describe seeing “large pieces” of ballots “torn off”; “bubbles being filled absolutely perfect”; and at least “60,000 illegal ballots.”

In an interview with Gateway Pundit, Logan confirmed the threats and said they came from both sides.

“Logan said he was threatened earlier in the process by an attorney on his results. Doug told the attorney to go jump in a lake. Doug also claims the revisions that were made kept the integrity of the report. The report was not compromised. Doug assured The Gateway Pundit that he and his team took a neutral stance. Their goal was to tell the truth about what happened in Maricopa County. His team also received numerous threats from the Left,” Gateway Pundit noted.

The audit “also discovered that Maricopa County purged their database and then scrubbed the machines before they were turned over to the auditors,” Gateway Pundit noted.

Ben Cotton told the Arizona Senate on Friday that his team was able to retrieve the deleted information and was able to identify who deleted the evidence before the machines were turned over to the audit team.

Logan told Gateway Pundit that he was not surprised by Big Media’s deception about the final audit report, noting that the report was not just a recount of all of the ballots but was an audit of the ballots and the machines.

“It is now up to Arizona Attorney General Mark Brnovich to investigate the questionable and fraudulent ballots listed in the report,” Gateway Pundit noted.

The producers of the auditors’ video noted:

“The people behind this video are individual American citizens who stepped up to help others hear the voices of our fellow citizens. This is non-partisan, and inclusive of all citizens, regardless of ideology. Every one of our voices matters, and WILL be heard. Our elections are to be decided by US; not big tech, not big media, not big pharma, and not by anyone else, regardless of how much money they have or how long they’ve been in office. We will not be divided any longer.

“The audit was designed to be a comprehensive review of the results from the Maricopa County 2020 general election to confirm the effectiveness of existing legislation in governing elections, and to provide additional insights on possible areas of information-based legislative reform that could ensure an even greater level of integrity and accuracy in how elections are conducted.

“The non-disclosure agreements have now been lifted.”