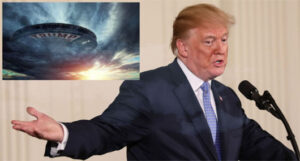 In a historic press conference, Trump confirmed to the world that extraterrestrials exist and that they are in contact with the U.S. Government. Unfortunately, they won’t reveal themselves until humanity has evolved to the point where they will re-elect Trump as President of the United States.

“I know the aliens, talked with the aliens, negotiated with them, and they are big fans of me,” said Trump to stunned reporters. “The aliens have always been nice to me and I appreciate that. Some are bad, but most are fine people. They told me the world isn’t ready to meet them since America didn’t re-elect me — well, technically I was re-elected but Sleepy Joe cheated. Aliens don’t like cheaters, believe me!”

Experts agree that since the masses were too dumb to ensure a Trump victory, mankind is likely not advanced enough to make first contact with the alien species.