Sources in frequent contact with White House officials confirmed that Trump insiders are “circling the wagons” as the Russian investigation metastasizes through media reports and leaks from the office of special counsel Robert Mueller. 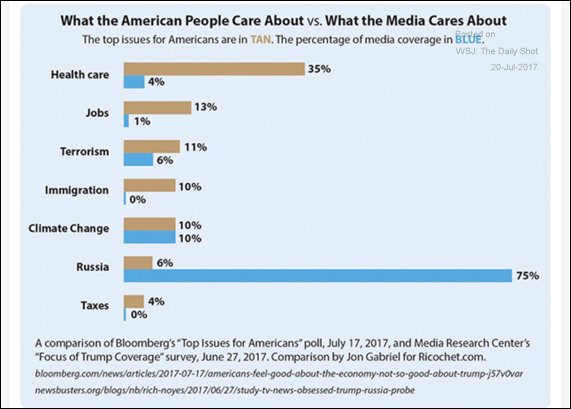 But one frequent conservative critic of Trump is not buying it.

“Perhaps he actually understands the American people better than us and knows he can continue to ride public apathy for a story only the media and Left seem to truly care about,” radio host Erick Erickson said on July 21.

Overall, Trump may have “the worst job approval rating of any president six months in, but he’s still more liked than Hillary Clinton and he is still winning all the counties he previously won,” Erickson said. “On top of that, Republicans are more enthusiastic about voting next year than Democrats.”

Erickson cited Bloomberg polling, which showed the major media devoting 75 percent of its coverage to the Trump-Russia investigation while just 6 percent of Americans think that is the most important news of the day.

“If the president gets his wall and gets a GOP win on healthcare, he probably thinks he can do whatever he wants on the Russia investigation,” Erickson said.

“Like it or not, he is going to be president for a while and as the media continues to chase this story, the public continues to not give a damn about it.”

Trump, meanwhile, told The New York Times in an article published on July 19 that he would not have selected Jeff Sessions as his attorney general had he known Sessions would recuse himself from the Russia investigation.

“Sessions should have never recused himself, and if he was going to recuse himself, he should have told me before he took the job and I would have picked somebody else,” Trump said.

Carlson said the attack is a “worrisome sign the president may be forgetting who is on his side,” adding that Sessions is an ally who actually believes in the Trump agenda.

Sessions was the first senator to endorse Trump in the GOP presidential primary.