The Wednesday edition of the Washington Exposé podcast, titled “The Democrat impeachment of the American people,” makes the case on why the conviction of President Donald Trump could pass in a secret ballot in the Senate if the no votes are not announced publicly in advance.

Hosts Bill Wilson, Larry Ward and Carter Clews noted that the Senate may be primed to brand Trump a “traitor” with the goal of similarly targeting his supporters to justify the repression of some 75 million Americans, including re-education when deemed necessary. 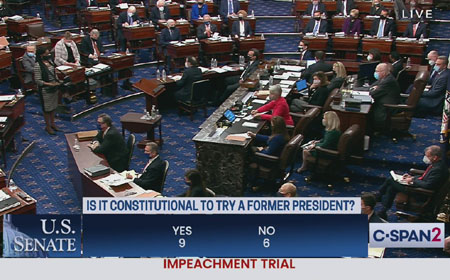 Following are excerpts from the transcript of Wednesday’s podcast:

Wilson: So gentlemen, today, yesterday was the first day of the Stalin show trial in the Senate, trying to convict Donald Trump of insurrection and impeachment… We had six slime balls then vote yesterday in favor of moving ahead on the trial. … Six Republicans. But here’s the math then, I want you to think about it, 67 convicts. They now have 56. There are four who have said they will not run again in ’22… What do you think they’re gonna do? That Burr of North Carolina, unreal guy who I don’t even wanna get into it. …. So I’m just saying it’s a much closer deal that anyone may think, and then we get down to what is the practical impact of conviction and of labeling Donald Trump and insurrectionist.

Ward: That’s not the word they’re gonna use, remember it went from… It went from a protest to a breach, to a riot, to an insurrection, so they’ve gotta elevate it, they’re going to call him a traitor.

Clews: Keep in mind the next step, folks, if the person that you’ve voted for and you supported whose bumper sticker you had your on your car and his flag you may have had waving from your porch is an insurrectionist, a traitor. Well, and you followed him. What are they gonna say? …. You go for a security clearance for a job in the government. Have you ever supported Donald Trump?

[The hosts discussed the possibility that there could be a secret ballot on conviction in the U.S. Senate.]

Ward: Remember what Stalin said. It’s not who votes. It who counts the votes We’ve already been cheated out of an election because the people who counted the votes were in deep Democratic cities with no oversight. Right? So what’s gonna happen when Chuckie Schumer and Mitch McConnell count the votes? So here’s the only play we have, and I want to be very clear. We need to get every Republican senator on the record publicly as to how they will vote. … The other thing is, is that on the day of the vote, what are they gonna do if senators walk up to the podium and instead of depositing a piece of paper in a box, say, I am voting against conviction here, and that then becomes the standard… If you don’t say that, we have to assume you were a traitor.

Wilson: And folks, look, this is about you and I’ve got a group of things we’re gonna talk about here about the destruction, the end of The United States submerging us into their globalist network. Oh, you’ll still have the flag occasionally. …

Clews: Precisely Bill. And we were saying that once, if they convict Trump, then they have to convict his followers because you followed the traitor, you were a part of the insurrection.

Wilson: Look, this is all very, very real, we’re not saying go hide unto your bed, what we’re saying is this: Knowledge is power. Just know what’s going on. Keep your eyes open.

[The hosts discussed a report that one of the ring leaders was a retired FBI Station Chief who was one of the first people through the door at the capital, leading other people in.  There was also a report of a tall man in fatigues, battle fatigues, who went up to the Capitol Police and whispered into an officer’s ear which led to the way being opened for people to go into the Capitol. “Who is that guy?” And now we have also facial recognition showing top Antifa Storm Troopers of the Left leading the charge and stirring things up. Observers are saying it was contrived, a set up.]

Ward: There was about a million and a half to two million people outside. Inside the Capitol …. you see the videos of people walking …  and even the video as they’re staying in the lines… Yes, they’re saying behind the ropes, they’re respecting the building, the people’s house. And so the mostly peaceful protest, and I would say the peaceful protest was not an insurrection, it was not a riot, it was not even a breach, they were let in, and the people who caused a little bit of vandalism were the Left or these crazy people in crazy costumes. [Producer asks him to clarify that he was not inside the Capitol]. I was not inside the building, you morons, I was not inside the building. Maybe that’s gonna be a crime, I got close to the building, I did not go inside the building, I’m an almost 50-year old man, and the days of me throwing punches and pushing my way through crowds is over, but I understand why people went in and I’ll say it again, people went in because there were two other rallies, two other rallies, and they were all peaceful, and the politicians and the elite and the media patted us on the head and said, nice little protest. We’re doing what we want anyway. That’s right. And so when we got that pat on the head the third time, we said, we wanna make sure we’re heard, and that’s why people got closer to the Capitol, they wanted to be heard. John Kennedy, said,“Those who make peaceful revolution impossible will make violent revolution inevitable.”

Clews: You’re exactly right, and let’s point out, we know there were three deaths of police officers related to this for some reason, two committed suicide, the third, we’re told they really haven’t determined the cause of death.

[The hosts discussed that to raise questions about the perception of reality risked venturing outside the official narrative which could lead to prosecution.]

Wilson: Remember, it was a perception of reality for 500 years that the earth was flat, and yes, the inquisition did kill people who violated that [perception of] reality. It’s no different now, folks, we like to pretend that somehow we’re so modern and so advanced. …

Ward: So we have to wake up to the reality, and here’s the two things you can do, you can … put your head down and just fall into a deep depression, and I know a lot of good conservatives that are falling into a good depression or pretending like none of this is actually happening. … Things are not going to end well for you. You have to fight. … That’s our duty as free Americans, we have to fight, and we have to fight everything, and you can start by taking off the damn mask that.

Wilson: Remember what Solzhenitsyn said that in the camps in the gulag, they would stay up nights and wonder how terrible it was that people hadn’t just stood up and said No, that… When the KGB came to the door, instead of locking their doors and hiding and being quiet, that if the people of the apartment block had come out and said, No, you’re not taking them. And so folks, there were 75 million of us that voted the right way.  … [the hosts questioned if anyone actually believed that 80 million had actually voted for the other candidate] ….  Yeah, so what I would tell you is the great hope is that they can’t arrest all of us, they can’t kill all of us. …So little acts of defines from every area add up, and thank you, Tom Brady. Thank you for proving that, yes, a 43-year-old man can in fact beat the living hell out of a bunch of 20-year-old pampered punks, and thank you for taking and covering up the symbol of that disgusting company that if you think about Nike, they get their shoes made in China, probably with slave labor in some places, and then they sell their product to ghetto kids at inflated prices because it’s so cool, they’re stealing from both ends. … So I wanna thank you for listening to us today. I hope we didn’t drag you down, but I also hope we showed you that is dark as things may appear and they are dark, that there are 75 million rays of hope out there, and each of us have to do whatever we can do because these people are not smart enough or they have no work ethic, they are not gonna defeat us if we simply refuse to comply, we will not gently walk into the camps.