U.S.-Russia relations have deteriorated rapidly in recent days, with President Barack Obama vowing to launch a cyber war against Moscow for its alleged meddling in the U.S. presidential election.

Democrats hit the warpath after accusing Russia of hacking the email accounts of the Democratic National Committee (DNC) and Hillary Clinton’s campaign chairman. 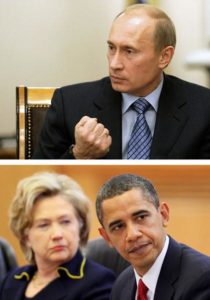 Now, new emails released by WikiLeaks have revealed the Clinton campaign’s disdain for, among others, Catholics and “needy Latinos” as well as its collusion with major media to ensure the coronation of what would be the U.S.’s first female president.

Clinton’s promise to hit the “reset” button with Moscow is now just a distant memory.

“They started this hysteria, saying this [hacking] is in Russia’s interests, but this has nothing to do with Russia’s interests,” Russian President Vladimir Putin said, adding that his government would collaborate with whoever won the election “if, of course, the new U.S. leader wishes to work with our country”.

U.S. Vice President Joe Biden said on Oct. 14 that America would send a “message” to Russian President Vladimir Putin in response to the alleged hacking.

Biden told NBC News in an interview: “We’re sending a message. We have the capacity to do it. It will be at the time of our choosing. And under the circumstances that have the greatest impact.”

Kremlin spokesman Dmitry Peskov said that “to the backdrop of this aggressive, unpredictable line, we must take measures to protect [our] interests, to hedge risks.”

Russian Foreign Minister Sergey Lavrov said the accusations by the Obama administration that Moscow was interfering with the U.S. election process were “flattering” but “ridiculous” and unsubstantiated.