Not backing down: Buchanan’s warning to America

Is America in its twilight years? Patrick J. Buchanan argues it is. Americans, especially conservatives, should heed his warnings. The very future of our republic is at stake. Mr. Buchanan has written the political book of the year — and maybe of our time.

In “Suicide of a Superpower” (Thomas Dunne Books, 2011), the nationally syndicated columnist and TV commentator delivers a damning indictment of the past two decades. His thesis: America is in decline. Unless it is reversed, the United States — like great republics before it — will be swept into the dustbin of history. 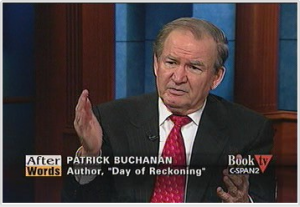 Mr. Buchanan was one of the few conservatives to directly challenge the Great Society Republicanism prevalent throughout the George W. Bush administration. He opposed No Child Left Behind, the Medicare prescription-drug benefit, runaway spending, amnesty for illegal aliens, economic globalization and the Troubled Asset Relief Program (TARP). He argues that the GOP establishment had lost its ideological way, abandoning principle in favor of power. Niccolo Machiavelli trumped Ronald Reagan.

The author insists that President Obama has accelerated — and deepened — the failed Bush policies. Mr. Obama is seeking to erect a European-style nanny state. Bailouts have propped up big business and big banks, as Middle America was forced to pay for it. Mr. Obama’s trillion-dollar deficits have brought us to the brink of bankruptcy. His economic stimulus failed to create jobs, while it expanded the reach of government — providing more beneficiaries and voters loyal to the Democrats. Obamacare is another massive entitlement program Americans cannot afford. Mr. Buchanan states that the exploding debt threatens our economic future. It will force America into default or to devalue our currency, leading to Weimar Germany-style inflation. Cherished programs — Social Security, Medicare, Medicaid, food stamps, defense spending — must be slashed, capped and reformed or America is doomed.Yet there is a lack of will among our political class. Both parties, Republican and Democrat, lack the stomach to impose the necessary, difficult cuts. Mr. Buchanan understands that welfare liberalism is like a “narcotic,” slowly making entire classes addicted to government handouts and sapping the nation’s moral fiber. Like the ancient Romans, we know we are in decay but are unable to stop it. Our debt crisis ultimately is a crisis of democracy. Mr. Buchanan asks: With so many dependent upon social programs, can America avoid the fate of Greece?Mr. Buchanan has been ostracized for years by some conservatives. In particular, they argue that he represents the worst traits of the 1930s old right — nativism, anti-Semitism, protectionism and isolationism — that make his politics beyond the pale. In fact, the very opposite is true: Mr. Buchanan is the last true conservative. He is the heir of postwar conservatism’s intellectual founder, Russell Kirk. Like Kirk, Mr. Buchanan is a Burkean traditionalist who champions the organic society and America’s distinct cultural identity.

For Mr. Buchanan, like most conservative traditionalists, nation-states, faith, family and community are not abstract concepts, as secular progressives claim. Rather, they are real, historic and eternal institutions necessary to a viable, just and free social order. This has been Mr. Buchanan’s central insight. It is why he is despised by many liberals and neoconservatives. His Christian nationalism stands in stark contrast to the rootless globalism and MTV morality of our age. He staunchly opposes abortion, pornography, homosexual marriage, drugs, euthanasia and the West’s hedonism. He understands that a nation is held together by a common culture, language, civilization, heroes, history and myths. Multiculturalism combined with open immigration is a recipe for national suicide. This is not racial chauvinism; it is common sense and proved by history. Austria-Hungary, the Soviet Union, Yugoslavia, Czechoslovakia (and most likely, the European Union) all were torn apart by resurgent ethno-nationalism and centrifugal forces. Multinational empires do not last; only cohesive nations endure.

In foreign affairs, Mr. Buchanan has been tarred as an America-hater, one who abandoned the Reaganite vision of U.S. global leadership. This is another lie. Like many conservatives before him — George Washington, Alexander Hamilton, Robert Taft — Mr. Buchanan is a continental realist. He champions a foreign policy based solely on protecting vital national interests. He supports maintaining the mightiest military in the world. He seeks to secure our porous southern border. He wants to end entangling alliances, such as NATO. He rightly believes it is time for wealthy Europeans and Asians to protect their own backyards — instead of piggybacking off Uncle Sam. In short, America has become overextended, squandering precious blood and treasure. It must retrench or it will collapse from imperial overstretch.

Mr. Buchanan does not care for nation-building. He is loathed by some members of the conservative establishment for opposing the Iraq war. In a cover story for National Review, David Frum denounced Mr. Buchanan and also the late anti-war conservative Robert Novak as “unpatriotic.” They were read out of the movement. Both Mr. Buchanan and Novak, however, have been intellectual giants. Both have championed the Reagan revolution marked by tax cuts, small government and free-market capitalism. Both were leading Cold Warriors who advocated anti-communism during the West’s darkest hour. And both — especially Novak — appeared in the pages of National Review over several decades.

The article was shameful. It tried to make support for the Iraq war the litmus test for belonging to the movement. According to Mr. Frum, Mr. Buchanan and Novak were insufficiently conservative. Yet the former Bush speechwriter is really a right-wing liberal. He has urged Republicans to be more open to abortion, gay rights, environmentalism and public education spending. In other words, Mr. Frum has called for surrender in the culture war. His polemics eventually boomeranged against him — and to some extent, National Review. Its founder, the late William F. Buckley Jr., turned against the Iraq quagmire (as did conservative columnist George F. Will). By Mr. Frum’s perverse logic, Buckley and Mr. Will also should be tarred as “unpatriotic.”

On Iraq, Mr. Buchanan was right and Mr. Frum wrong. The war became a protracted guerrilla campaign. More than 4,000 U.S. troops were killed, while tens of thousands were wounded and maimed. Iraq has slowly drifted into Iran’s orbit. The country has been fractured along religious and ethnic lines. Iraqi Christians, who date back to the time of Christ, have been murdered or expelled. The campaign has depleted America. Meanwhile, radical Islam continues to expand relentlessly across the Middle East, Africa, Asia and Europe.

Conservatives once derided Wilsonian internationalism — the messianic impulse to spread democracy around the globe — as naive and arrogant. They understood that the warfare state reinforces the welfare state. Both are forms of social engineering. And both must be dismantled.

The same holds for free trade. Traditionally, it has been men of the left — Woodrow Wilson, Franklin D. Roosevelt, John F. Kennedy and Bill Clinton — who have been ideological free-traders. It has been the right — Hamilton, William McKinley, Calvin Coolidge, Taft — who have espoused economic nationalism. Mr. Buchanan has opposed the North American Free Trade Agreement, the World Trade Organization and communist China’s privileged access to the U.S. domestic market.

Trade liberalization was supposed to usher in an era of unprecedented prosperity. Instead, the results have been disastrous: huge annual trade deficits, the loss of millions of manufacturing jobs, eroding wages for working- and middle-class citizens and the deindustrialization of America. The big winner is China. It has emerged as the world’s premier exporting and manufacturing nation. It is a rising superpower, having enriched itself at our expense. Washington has become a vassal of Beijing. For years, Mr. Buchanan was a lone prophet in the wilderness, decrying America’s economic betrayal.

Few have contributed more to modern conservatism than Mr. Buchanan. And even on issues on which I strongly disagree with him — the Israeli-Palestinian conflict, World War II — a rigorous and respectful debate is called for. Liberals silence dissent; conservatives are supposed to uphold freedom of thought and rational civility.

Mr. Buchanan represents a dying breed. He is a nationalist, a free-marketer and an unabashed Catholic. His life’s work amounts to fighting for the preservation of Western civilization with America as its bastion. Despite his defunct critics, Mr. Buchanan’s legacy will stand the test of time.