Newt said it: ‘No question’ 2020 battleground states were stolen

Stop the presses: A Republican brought up election fraud on what is about the only Fox News program that dares touch the subject. 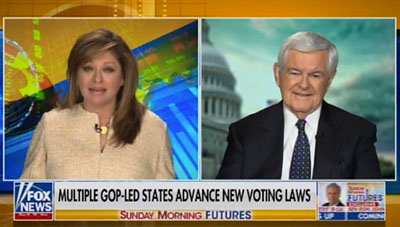 Former House Speaker Newt Gingrich told host Maria Bartiromo on Sunday Morning Futures that there was “no question” the 2020 election was stolen in the key battleground states.

Gingrich said: “You can actually buy an official Georgia presidential ballot on eBay. … So when they tell you they were controlling the ballots, it’s just not true. This was a very open system. It was a system where people could cheat, and did.

“In every one of the states that was very close that Trump lost you had those kind of shenanigans and you had state law violated in every single one of those states. In my mind there was no question that those states were in fact stolen. That doesn’t make the national media happy but I think as a historian people will find it’s absolutely true.”