And “there is absolutely no chance any of the Russian officials charged will ever see the inside of an American courtroom,” former Assistant U.S. Attorney Andrew McCarthy wrote for National Review on July 16. 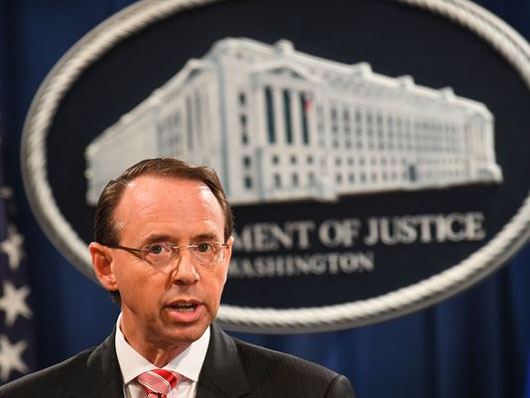 “The indictment is a strictly political document by which the special counsel seeks to justify the existence of his superfluous investigation.”

Writing for the American Spectator, Jed Babbin noted that if the indictments last week “were a serious pursuit of Russian wrongdoers (which, perforce, they aren’t) they would have been handed up by the grand jury, sealed from public disclosure, and one or more of the people indicted lured to some jurisdiction where they could have been arrested and brought to the U.S. for trial.”

But that “wasn’t Mueller and Rosenstein’s intent,” Babbin noted. “By timing the indictments on the last business day before the Trump-Putin meeting, these indictments were much more than a publicity stunt. They were an improper attempt to influence what Trump does at the summit.

Rosenstein, at his July 13 press conference announcing the indictments, made a “telling remark,” McCarthy noted. The Justice Department, Rosenstein said, will now “transition responsibility for this case to our Department’s National Security Division while we await the apprehension of the defendants.”

McCarthy observed: “Now, stop giggling over that last part – the bit where we hold our breath until Russian dictator Vladimir Putin extradites his spies into the FBI’s waiting arms. I’m talking about the first part: Mueller’s case, the definitive case about what Russia did to interfere in the 2016 election, is no longer Mueller’s case. It is being ‘transitioned’ – i.e., buried – in the Justice Department unit that deals with counterintelligence matters that do not result in public trials.”

This, McCarthy wrote, “underscores what we have been arguing here since before Mueller was appointed: There was no need and no basis in federal regulations for a special counsel.”

There is no known evidence that Trump-campaign officials “had any involvement in hacking by the Russian intelligence services,” McCarthy noted. “Mueller’s new indictment powerfully suggests that this could not have happened – the Russians were expert in their cyberespionage tactics, they did not need anyone’s help, and they took pains to conceal their identity from everyone with whom they dealt.”

Trump-campaign officials have been charged with other crimes that have “nothing to do with the 2016 election,” McCarthy wrote, adding that “some of those Trump officials had ‘contacts’ with Russians,” but Mueller “has never charged one of them with a crime related to Russia’s espionage attack on the election, nor has he ever elicited from any defendant who pled guilty an admission of any such crime.”

The only known allegations of such crimes are contained in the unverified, Clinton-campaign-sponsored dossier by ex-British spy Christopher Steele, “and the Trump-campaign figures implicated in it have either not been charged at all (e.g., Carter Page, Michael Cohen), or not been charged with a “collusion” crime (Paul Manafort),” McCarthy noted.

“Thus, among the worst aspects of Mueller’s new indictment is its continuation of the Justice Department’s politicized perversion of its critical counterintelligence mission.”

McCarthy continued: “This is not the way counterintelligence is supposed to work. And the Justice Department knows it. That is why Mueller’s indictment will now be the property of DOJ’s National Security Division, the home of other non-prosecutable foreign counterintelligence work that is never intended to see the light of day in a public courtroom.”

Besides “the two-dozen-odd Kremlin operatives already charged, there are 144 million other people in Russia who will never see the inside of an American courtroom,” McCarthy wrote. “If Mueller indicts every one of them, his stats will look really impressive . . . and there will still be no Trump conspiracy against the election.”

“Whether or not the Democrats had been tipped off by Mueller or Rosenstein, they reacted with near-record speed demanding that the president cancel the Putin meeting.”

Babbin concluded: “In the late 18thcentury, Russian Field Marshall Grigory Potemkin, then the most powerful man in Russia, supposedly had constructed several phony villages along the path that his lover, Empress Catherine, would follow in her tour of southern provinces so she could see contented, happy peasants when nearly the entire population of Russia lived in misery and slavery. His name became synonymous with falsity.

“Robert Mueller and Rod Rosenstein are earning a similar place in history if not our language.”