Skewed world: Geographers say too many straight white men in their ranks

Apparently, there is too much “white heteromasculinism” in geography these days.

Those who thought geography mainly dealt with maps should know that there is a great deal of scholarship on the subject that is done by people. 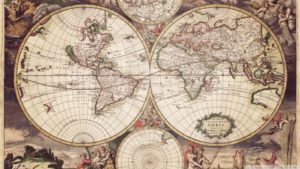 A pair of geographers have published a study arguing that papers should avoid citing so many straight white males because it gives unfair credence to privileged scholars, the Washington Post reported on July 17.

Geographers Carrie Mott and Daniel Cockayne said they were motivated to write their study because they “shared feelings of discomfort, frustration, and anger” over the publication practices of most geography scholars, the report said.

They argue that citing a predominantly white cannon perpetuates “white heteromasculinism,” which they define as an oppressive system that only benefits “white, male, able-bodied, economically privileged, heterosexual, and cisgendered” people.

“This important research has drawn direct attention to the continued underrepresentation and marginalization of women, people of color,” the geographers said, insisting that narrowly citing white men and established scholars “does a disservice … to researchers and writers who are bothered by white heteromasculinism.”

The American Association of Geographers (AAG), which published a study last year breaking down geographers by gender, found that working professional geographers not in the education sector are 72 percent male and 28 percent female. It also found that 63 percent of faculty in university and college geography departments are male, while only 37 percent are female.

Referencing the work of white, straight males “means that the views and knowledge that are represented do not reflect the experience of people from other backgrounds,” Mott told Campus Reform. “When scholars continue to cite only white men on a given topic, they ignore the broader diversity of voices and researchers that are also doing important work on that topic.”

Mott and Cockayne concluded that geography scholars should count the citations in every piece of work they produce before publishing anything to be sure they have enough citations from people of diverse backgrounds, irregardless of topic.