Mike Lindell said he has launched an investigation into why Fox News is so reluctant to have him on air to discuss election fraud allegations. 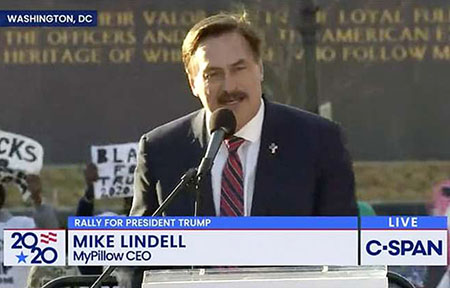 In an interview on Steve Bannon’s War Room, the My Pillow CEO decried how Fox News seemingly is refusing to conduct interviews with anyone with inside knowledge of what occurred in the 2020 presidential election.

“I’ve hired private investigators and I’ve spent a lot of money on them to investigate everything,” Lindell said.

“The bots and trolls, who’s behind them? Why is Facebook involved, Wikipedia involved? And then the big question: Why isn’t Fox having people on?”

Both Dominion Voting Systems and Smartmatic have sued Lindell over statements he made about voting data fraud in the aftermath of the 2020 election.

Powell said her comments cannot be considered defamatory because the information she shared about Smartmatic voting machines is “backed by sworn affidavits, expert reports, and other corroborating evidence.”

She also argues the First Amendment protects her statements about Smartmatic because they are “political speech and were made in connection with active litigation.”

“I stand by my statements about Smartmatic today,” Powell said.” I believe every allegation I have made about Smartmatic and the vulnerability of these machines is true. This case is meritless and should be thrown out entirely.”

Meanwhile, in response to Big Tech censorship, Lindell is launching a social media website that will be able to handle over a billion users.

“I believe it will handle upwards of a billion. If it doesn’t, we will get to that capacity. I don’t think that’s exaggerated, by any means,” Lindell told The Epoch Times last month.

The platform, which is described as a mix of YouTube and Twitter, will be known as “Frank,” and boasts the slogan “the voice of free speech.” It currently has an inoperational landing page.

“It’s going to be the safest, secure platform. I built it expecting to be attacked,” Lindell told The Epoch Times.

Lindell also said he is building more alternatives to Big Tech than just social media, announcing he is developing a rival to Amazon called “My Store.”