A U.S. guided missile cruiser and two F-18s in 2004 made visual and radar contact with a UFO that traveled at “ballistic missile speeds,” according to a leaked Pentagon report.

The Pentagon’s report, issued in 2009, reveals first-hand accounts of the encounter, which was documented in video that emerged in December of last year.

The UFO was encountered by the Nimitz carrier group off the coast of Mexico on Nov. 14, 2004.

The report describes the object as being white, 46-feet-long, and shaped like a “Tic Tac” with nor wings or nacelles. It descended from 60,000 feet to 50 feet at “ballistic missile speeds” and then hovered. The UFO also may be been docking with an underwater craft.

Beginning around Nov. 10, 2014 the guided missile cruiser USS Princeton made multiple radar contacts with what the report calls an Anomalous Aerial Vehicle (AAV).

On Nov. 14, 2014, the Princeton again detected an AAV and called it in two F/A-18 Hornets that happened to be returning to the USS Nimitz from a training exercise.

According to the report, the first F-18 to encounter the object flew within five to 10 nautical miles of its location, but could not see it. Instead, the pilot reported seeing a circular disturbance in the water about 50 to 100 meters in diameter. It reminded the pilot of something rapidly submerging in the ocean, like a submarine.

The report hypothesizes that “it is possible that the disturbance was being caused by an AAV but that the AAV was ‘cloaked’ or invisible to the human eye.”

When he returned to the USS Nimitz, the pilot’s intelligence officer asked him if he’d seen the “supersonic Tic Tac.” 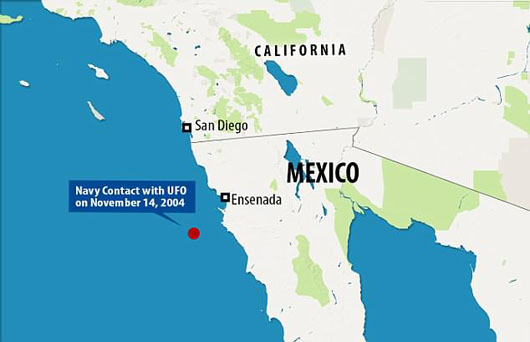 Another F-18, piloted by Cmdr. David Fravor and Lt. Cmdr. Jim Slaight, made visual contact with the AAV. The two pilots have since publicly discussed the event, corroborating the report.

Fravor said he spotted a disturbance in the water, almost as if it were boiling. But this time, hovering above the disturbance was a strange object. The object was shaped like an elongated egg or a “Tic Tac,” according to Fravor, and was “holding like a Harrier,” the jet that can take off vertically.

Slaight described it as “solid white, smooth, with no edges. It was uniformly colored with no nacelles, pylons or wings.” He described the exterior of the object as “like it had a white candy-coated shell, almost like a white board.”

When Fravor attempted to make a close pass of the object to attempt visual recognition, he said the object appeared to react, realigning its axis to point at the approaching plane. The AAV then ascended quickly and departed at supersonic speed.

Another plane made a video that has since been released, according to the report. The video can be viewed here