Latest from the vaccinator: Bill Gates pushes plan to shield Earth from the Sun

Globalist billionaire Bill Gates, a strong proponent of vaccinations and lockdowns, is funding a project that would dim the Sun’s rays purportedly to save the Earth from global warming. 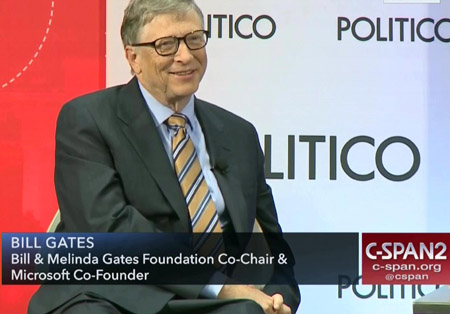 “One of Gates’ most controversial causes just got a go-ahead: A project that would help block out the Sun,” the Western Journal’s Douglas Golden noted in a Dec. 27 report.

“The project represents one of the most controversial aspects of what’s known as ‘geoengineering’ — the idea that, to tackle issues like climate change, massive aspects of our ecosystem can be played with or changed. In this case, it would involve reflecting some of the Sun’s rays to stop them from reaching Earth,” Golden wrote.

Reuters reported that the plan — a Harvard University project funded largely by Gates — will “test out a controversial theory that global warming can be stopped by spraying particles into the atmosphere that would reflect the Sun’s rays.” The report added that the Swedish Space Corporation has already taken strides in testing out the theory.

“The idea is simple: spray a bunch of particles into the stratosphere, and they will cool the planet by reflecting some of the Sun’s rays back into space,” Nature’s Jeff Tollefson wrote in 2018. “Scientists have already witnessed the principle in action.”

Reuters reported that the plan could move forward in the “autumn of 2021 or spring of 2022,” and would “release a tiny amount … of non-toxic calcium carbonate dust into the atmosphere” to test the theory.

Reuters reported that many of the plan’s opponents fear a “slippery slope toward engineering the climate.”

Niclas Hällström, director of the Sweden-based environmentalist think-tank WhatNext? told Reuters: “There is no merit in this test except to enable the next step. You can’t test the trigger of a bomb and say ‘This can’t possibly do any harm.’ ”

Hällström added that he has reservations over the concept for its “potential to change rain patterns or crop yields.”

Lili Fuhr, who is head of the international environmental policy division at the Heinrich Böll Foundation in Germany, said that the project is, indeed, “crossing an important political red line.”

“They don’t want to stop at this small experiment. The reason is to get bigger experiments,” she explained.

Reuters reported that both Fuhr and Hällström said the plan “would violate a global 2010 moratorium on geoengineering under the UN Convention on Biodiversity.”

Jim Thomas, co-CEO of environmentalist organization ETC Group, said that he and his peers also oppose the idea.

“This is as much an experiment in changing social norms and crossing a line as it is a science experiment,” Thomas warned.