Joe Biden must be impeached. According to the standards set by Democrats in their first impeachment against then-President Donald Trump, Biden has clearly committed high crimes and misdemeanors. He must go.

Biden’s White House suspended a $100 million lethal aid package to Ukraine just days prior to the summit with Russian strongman Vladimir Putin — a direct “quid pro quo” to appease Putin in order to get him to attend the summit and thereby politically benefit Joe Biden himself. Biden and his team desperately wanted the summit, hoping it would elevate and depict him as a statesman. 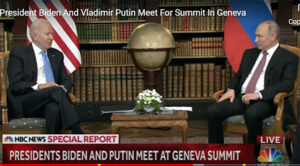 In short, they weakened and undermined a key ally by halting American military aid to advance Biden’s personal interests.

The Democrats impeached Trump for much less.

They claimed that Trump’s decision to temporarily freeze military assistance to Ukraine on the condition Kyiv demonstrate it’s seriousness in combating corruption — a quid pro quo, as they called it — was a gross abuse of power and thereby grounds to impeach him. Trump, however, did nothing wrong in holding up the aid. First, the aid was eventually sent. Ukraine got their money — and no corruption investigation was conducted. Secondly, the aid was about future funding, not current funding. Thirdly, the Ukrainian government never knew the future aid package had been halted.

Finally and most importantly, then-Vice President Joe Biden was the Obama administration’s point person on Ukraine. His corrupt and drug addict son, Hunter, was appointed to sit on the board of Burisma, a Ukrainian energy company controlled by a powerful oligarch. Hunter earned millions of dollars, despite the fact he knew nothing about oil or Ukraine. (In his memoir, Hunter admits he was stoned and high so often at this time that he practically never left his apartment, constantly snorting crack cocaine and sleeping with prostitutes.)

Joe Biden then withheld $1 billion in foreign aid unless Ukraine fired the prosecutor investigating Burisma and Hunter Biden for his role on the board. Kyiv got rid of the investigator; Ukraine got its aid; and Hunter continued to roll in the cash in an obvious pay-for-play and influence-peddling, bribery scheme. Trump had every reason — and right — to demand an investigation into the Biden crime family’s massive corruption.

Yet, Joe Biden’s actions prior to the recent Geneva summit were infinitely worse. Team Biden halted a separate lethal aid package — different from the one authorized by Congress — to Kyiv, as Russia continues to menace eastern Ukraine and having annexed Crimea. This move has not only significantly hurt Ukraine’s ability to defend itself, but strengthened Putin’s hand in destabilizing and dismembering our ally. Biden’s decision directly bolsters Putin, who ironically the Democrats and the liberal media insist is America’s mortal enemy.

Moreover, Biden’s behavior toward Moscow needs to be investigated as part of any impeachment proceeding.

His approach is not just rank appeasement; rather, it borders on treason.

Almost every policy has been designed to empower and embolden Putin’s Russia. Prior to the summit, Biden publicly rejected Ukraine’s bid to join NATO, remarkably claiming that Kyiv is too “corrupt.” But Ukraine wasn’t too corrupt for his son, when it came to his shady business dealings.

Biden has also waived sanctions on the key individuals and companies involved in building the Nord Stream 2 oil pipeline, which will allow Russian oil and natural gas to flow to Germany and much of Western Europe. While his administration kills vital oil pipelines in America, such as the Keystone XL, it is openly supporting Russian pipelines that will increase Europe’s energy dependency upon Moscow, thereby vastly expanding Putin’s power and influence.

Nord Stream 2 is an economic lifeline to Putin’s authoritarian regime, which will enrich him and his cronies to the tune of tens of billions of dollars.

For years, Biden and the Democrats (and the Fake News media) claimed that Russia allegedly meddled in the 2016 election on behalf of Trump, threatening our democracy. Yet, when given the chance to directly confront Putin on this supposedly existential issue, Biden did nothing. He never mentioned it — never mind impose crushing penalties — at their meeting in Geneva.

Either Biden blinked or it was all a Deep State lie. Which begs the question: What do the Russians have on Biden and his corrupt family?

Despite the claims of Russian collusion, Trump in reality was much tougher on Putin. He blocked Nord Stream 2; imposed punishing sanctions on Putin’s regime and its top oligarchs; and provided lethal military aid — including anti-tank missiles — to Ukraine to counter Russian aggression, while Obama and Biden sent blankets and food packets.

If Trump had done what Biden did prior to the Geneva summit, Democrats and the media would be clamoring — demanding — that there be multiple investigations and another impeachment.

Biden gave away the store, selling the United States and our allies down the river.

It’s time for Republicans to stand up to this criminal regime. It’s time they demand Biden be impeached.