Judicial Watch announced that it filed a Freedom of Information Act (FOIA) lawsuit against the U.S. State Department for messages sent through the SMART (State Messaging and Archive Retrieval Toolkit) system that mention Hunter Biden. 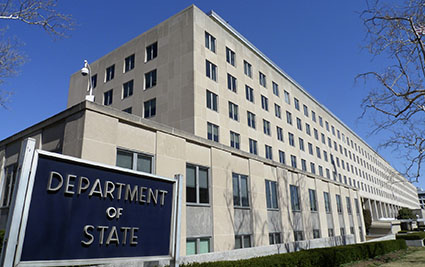 “The State Department is unlawfully ignoring FOIA law to protect Hunter and Joe Biden,” said Judicial Watch President Tom Fitton. “We have no doubt, given our prior finds, that the State Department has many secrets about Biden corruption.”

Judicial Watch filed the lawsuit after State failed to reply to a February 11, 2022, FOIA request for:

All cables/teletypes and email messages sent via the SMART system that reference Hunter Biden, excluding any records that consist solely of media articles or compilations.

In an email dated February 16, 2022, the State Department acknowledged receipt of the request and asserted that the agency was invoking FOIA’s ten-day extension of time provision due to “unusual circumstances.” As of April 15, State failed to comply with Judicial Watch’s FOIA request.

Hunter Biden continues to be the subject of a federal criminal investigation in Delaware.

Judicial Watch also uncovered records showing that former U.S. Ambassador to Ukraine Marie “Masha” Yovanovitch had specifically warned in 2017 about corruption allegations against Burisma Holdings. During her November 2019 testimony in the impeachment proceedings against President Donald Trump, Yovanovitch told lawmakers that she knew little about Burisma.

In an October production from the State Department, Judicial Watch received records which included a briefing checklist of a February 2019 meeting in Kyiv between Yovanovitch and Sally Painter, Burisma’s lobbyist at Blue Star Strategies, and a Burisma executive. The briefing checklist noted that Painter also planned to meet with Foreign Commercial Service (FCS) Officer Martin Claessens “regarding the Burisma Group energy company.”

At the time of the meeting, Hunter Biden, son of President Joe Biden, was serving on the board of directors for Burisma Holdings, a Ukrainian energy firm, despite having no previous experience in the energy industry. Biden served on the board of Burisma until his term expired in April 2019.

In September 2020, Judicial Watch made public records that show George Kent, the Obama administration’s deputy assistant secretary of state in charge of Ukraine policy, which was copied to Yovanovitch, highlighting Russia-linked media “trolling” Joe Biden over “his son’s business.” An email was sent four days prior to the inauguration of President Donald Trump to a redacted recipient and CCd to Yovanovitch with the subject line “medvedchuk-linked vesti trolls Biden.” Kent writes: “Burisma – gift that keeps on giving. (With medvedchuk affiliated Vesti pushing the troll like storyline on visit day)”