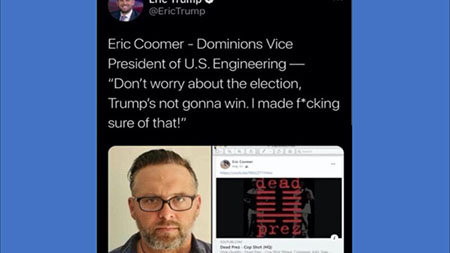 Powell’s team was granted questions in a deposition on Sept. 23. Coomer was reportedly deposed for about an hour.

But, thanks to Judge Marie Avery Moses, Coomer’s testimony has yet to be revealed. One day after the deposition, Judge Moses issued a protective order, effectively sealing the transcript.

A source told Gateway Pundit: “The Judge issued this order sua sponte, which means that no one asked her to do this. She just did it on her own the day after Coomer gave a train-wreck deposition in which he was very clearly emotionally unstable, arrogant, and repeatedly failed to give direct answers to questions. He was clearly playing games and his testimony is simply not credible.”

The media is now blocked from downloading Coomer’s testimony.

Judge Moses ruled that Coomer’s deposition “should be protected from disclosure outside of these proceedings at this time and until otherwise modified by subsequent order of the Court.”

In early October of 2020, a week before early voting started in Georgia, 11 Alive news reported that Dominion updated all the voting machines in the state: “The state told us last week that the update was routine. But the sheer scope of the update of the state’s 34,000 or so voting machines is what’s raising eyebrows. The biggest update occurred last week at Fulton County’s voter warehouse in northwest Atlanta. Critics have filed suit to scuttle the voting machine because they say the update is more than Georgia’s 159 counties can safely handle.”

Gateway Pundit reported at the time that Coomer was the individual who updated the machines.