Japan’s former prime minister and most popular living statesman Shinzo Abe, 67, has been shot, a government spokesman said Friday, as local media reported he showed no vital signs. He was pronounced dead at 5 p.m. local time on July 8.

“Former prime minister Abe was shot at around 11:30 am,” in the country’s western region of Nara, chief cabinet secretary Hirokazu Matsuno told reporters.

Abe, who continued to staunchly counter China’s increasingly aggressive posture in the region, had been delivering a stump speech at an event ahead of Sunday’s upper house elections when the apparent sound of gunshots was heard, NHK and Kyodo said.

In a statement former President Donald Trump said: “Really BAD NEWS FOR THE WORLD! Former Japanese Prime Minister Shinzo Abe is dead. He was assassinated. His killer was captured and will hopefully be dealt with swiftly and harshly. Few people know what a great man and leader Shinzo Abe was, but history will teach them and be kind. He was a unifier like no other, but above all, he was a man who loved and cherished his magnificent country, Japan. Shinzo Abe will be greatly missed. There will never be another like him!”

“He was giving a speech and a man came from behind,” a young woman at the scene told NHK.

Abe, Japan’s longest-serving prime minister, held office in 2006 for one year and again from 2012 to 2020, when he stepped down citing health issues.

However Abe had continued to be the dominant voice from Japan in opposing China’s rapidly-expanding influence in the region as the following report demonstrated:

Although he is no longer Japan’s Prime Minister, Shinzo Abe continues to be his nation’s most recognizable, influential and outspoken statesman, especially in recent months leading up to Russia’s invasion of Ukraine amid rising concerns China would follow suit in Taiwan.

Recently, on a Fuji TV talk show, he called on the United States, in the style of former President Donald Trump, to step up and end its longstanding policy of “strategic ambiguity” on defending Taiwan.

“It is time to abandon this ambiguity strategy. The people of Taiwan share our universal values, so I think the U.S. should firmly abandon its ambiguity.”

Earlier, Abe made waves about Japan’s military posture in East Asia with his 15-minute speech to the Taiwan’s Institute for National Policy Research on Dec. 1, 2021.

• Every time he met Xi Jinping, he made clear that Japan has every intention to protect the Senkaku Islands.
• He also warned that Taiwan’s emergency is Japan’s emergency and the Japan’s security emergency is likewise the emergency of the Japan-U.S. alliance.
• “If he invades Taiwan, it will lead to economic suicide for China.”
• “For self-defense, Japan is strengthening its self-defense capabilities not only by words but also by actions.” (Deployment of F35 aircraft, cruise missile development, deployment of self-defense forces to the Nan sei [South-West] islands.)

The popular former prime minister is not retired. Abe is still an active member of the Japanese Parliament. The Liberal Democratic Party (LDP), the conservative party of Japan, is the leading party in power.

With his background and international presence, Abe sent a clear and very significant message in support of Taiwan’s independence and security.

His ruling LDP party is divided into several factions. Abe is the leader of the largest faction and is therefore one of its kingmakers.

Abe, who served as Japan’s top leader for eight years, also has a personal network with influential leaders of other countries including, significantly, former U.S. President Trump.

Like the United States, Japan has strategic ties with both communist China and Taiwan and thus navigates a diplomatic and political tightrope between the two nations.

But there was nothing ambiguous about Abe’s remarks on Dec. 1. He clearly stated, “Taiwan is a keystone that shares common value with Japan…. Stronger Taiwan is the benefit to Japan. And stronger Taiwan will be the great assets to the whole world.”

He betrayed no fear of Xi Jinping and delivered the following riveting warning:

“If he meddles in Taiwan, China will commit economic suicide.”

Abe suggested that if Xi invades Taiwan, China faces economic sanctions that would lead to the collapse of the Chinese economy and his startling prediction that such a collapse would bring an end of the Chinese Communist Party’s rule.

This rhetorical artillery shell from a powerful Japanese statesman could not be ignored by Beijing.

Chinese Foreign Ministry spokesperson Wang Wenbin said, “Abe, in disregard of the basic norms governing international relations and the principles set out in the four political documents between China and Japan, flagrantly made irresponsible remark on Taiwan and [interfered] in China’s internal affairs.”

1. Gave courage to the Japanese people and showed a clear foreign policy direction toward Taiwan.
2. Effectively restrained Japan’s relatively pro-China Kishida Cabinet.
3. Sent a strong signal to the Biden administration to abandon an ambiguous U.S. policy and to take a clear-cut strategy toward China.
4. Encouraged the Taiwanese people. Abe for the first time delivered a public message Taiwanese had been waiting for many years to hear from Japanese leaders.
5. Provided a clear warning to Xi Jinping and the Chinese Communist Party not to invade Taiwan by showing clear Japanese national intent.

Abe’s series of speeches were unprecedented and served to counter Japan’s current business and political trends.

China’s aggression toward Japanese business communities represented by Japan’s powerful Business Federation (Keidanren) and LDP’s coalition party Komeito is very forceful indeed. It directly affects their livelihoods as they have heavily invested in China over the decades.

China is still Japan’s top trade partner. Over 25 percent of Japan’s total exports are to China while exports to the 2nd largest country, the United States, accounted for just above 10 percent.

Japan’s conservative leading party, LDP (Liberal Democratic Party), is in a coalition with a pro-China political party, Komeito. Its leaders, including the current president and Japan Prime Minister Kishida, are under pressure not to protest against China’s aggression against its neighboring countries and its human abuses.

Many Taiwanese were impressed by Abe’s expression of the Japanese spirit, and bonds between Japan and Taiwan have deepened.

In addition, Abe spoke for the feelings of the Taiwanese and sympathized with the Taiwanese people who have been suffering from international isolation.

The following day, on Dec. 3, Prime Minister Abe was interviewed by Taiwan’s Formosa Television and broke new ground with his suggestion that “Taiwan and Japan can build an alliance in technology.”

Both sides of the Taiwan Strait responded immediately to Abe’s Dec. 3 interview.

All Taiwanese media reported on his speech. It was the first time any Japanese Prime Ministers had delivered a stern warning to Xi Jinping in a dignified manner.

Even earlier, Abe had participated in the forum “Sydney Dialogue” by Australian Thinktank, ASPI, on Nov. 19, 2021. In his remarks Abe suggested, “Japan will cooperate with AUKUS (US, UK, Australia military defense alliance), especially with AI and cyber-terrorism measures.”

Abe on Dec. 14 followed his Dec. 1 remarks with a keynote speech at the virtual “2021 Taiwan-US-Japan Trilateral Indo-Pacific Security Dialogue” co-sponsored by think tanks from Taiwan, Japan, and the United States.

In his speech, Abe expressed his support for bringing Taipei into the fold of international organizations, saying it has universal relevance.

• We must fight to protect democratic politics forcefully with a renewed determination. There is no other country like Taiwan that is feeling it and acting upon it with urgency.
• Taiwan and her democratic politics are threatened, and it is also a serious challenge for Japan.
• We support and welcome Taiwan’s participation in CPTPP (Comprehensive and Progressive Agreement for Trans-Pacific Partnership).
• We should never forget that weakness leads to the provocation. In all areas including land, sea, air, cyber, and space, the three countries of Japan, the United States, and Taiwan should make efforts to strengthen defense capabilities.
• We must encourage self-restraint [from the CCP] in pursuing territorial expansion, provocation, and/or bullying neighboring countries.
• As it is an economic superpower, if China continues to pursue military adventure, it will be committing economic suicide.

During her opening remarks, President Tsai Ing-wen of Taiwan expressed deep gratitude to Abe and other Japanese people who support for Taiwan’s participation in the CPTPP.

This speech boosted the morale of all democratic countries worldwide that openly support Taiwan. 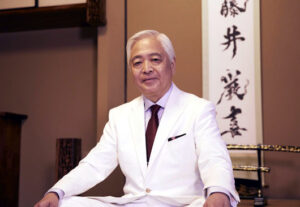 Gemki Fujii publishes World Forecast in Japan and has served as advisor of Nomura Securities and Mitsui Trust Bank. A graduate of Waseda University, he was a guest scholar and instructor at Claremont Graduate University and Harvard University. A proud supporter of President Donald Trump, Mr. Fuji is also a black belt of Kendo and Laido (sword martial arts).

Japan’s top leader assassinated; Flashback — Shinzo Abe has a message for Joe Biden: Man up added by Editor One on July 8, 2022
View all posts by Editor One →