Islamic State (ISIS) jihadists on Nov. 11 recaptured the town of Abu Kamal in eastern Syria from the Syrian army. 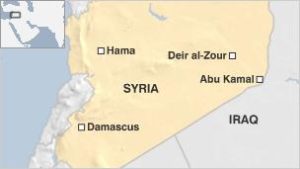 Earlier this week, Syrian troops and allied militia fighters had entered Abu Kamal and by the next day had declared the town liberated from ISIS’s control.

“ISIS fully recaptured Abu Kamal, and regime forces and allied militia are now between one to two kilometers from the city limits,” Rami Abdel Rahman, head of the Britain-based Syrian Observatory for Human Rights, according to AFP.

The Observatory reported 26 civilians killed, including nine children, since Nov. 10 in artillery fire by regime forces and Russian air strikes that hit villages and camps for those displaced by the fighting in Abu Kamal.

Abu Kamal, located near the border with Iraq, is considered the last prominent stronghold of ISIS in Syrian territory.