ISIL rocket fired at U.S. troops in Iraq may have contained mustard gas

The U.S. military is running tests to determine if a chemical agent was used by Islamic State of Iraq and Levant (ISIL) in a Sept. 20 rocket attack near an Iraqi base used by U.S. troops.

A U.S. military official said the rocket came within hundreds of yards of U.S. forces near the Qayyarah West base. There were no injuries in the attack. 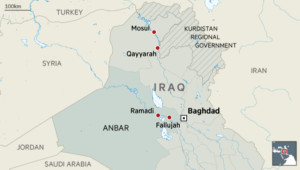 U.S. forces inspected fragments from the rocket and took a small sample of a suspicious “tar-like, black, oily” substance, which initially tested positive for mustard agent but then tested negative in a subsequent examination, the official said. Further tests were underway.

“It’s been more than 24 hours and we haven’t seen anyone who has any indication of blistering or anything like that,” the official said. “There are absolutely no injuries. Nobody has been off their typical work schedule. It hasn’t impacted the mission in any way.”

Hundreds of U.S. forces are stationed at the Qayyarah West base, working to prepare an airfield ahead of Iraq’s offensive to retake the city of Mosul from ISIL, said the official, who spoke with Pentagon reporters on condition of anonymity.

Analysts have warned that the terrorist group might use chemical weapons during the upcoming Mosul offensive.

The U.S. official described ISIL’s technical skills as crude when it came to mounting a chemical weapon attack and appeared to play down any growing concerns about a threat to U.S. forces.

“We have a moderate level of concern … on a day to day basis and our concern isn’t much greater after seeing this, because it falls into the expected realm,” the official said.