U.S. Marines conducted a live fire exercise in the southern Syrian desert after Russia said it intended to enter the deconfliction zone near an American base in the area. 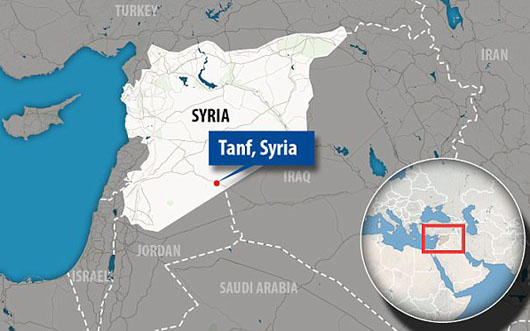 Russia was “advised” by the U.S. to stay clear of the 55-kilometer At Tanf zone.

“The Russians agreed to a [34 mile] ‘deconfliction zone’ around the At Tanf garrison to avoid accidental conflict between our forces, and to remain professionally engaged through de-confliction channels. We expect the Russians to abide by this agreement,” Navy Capt. William Urban, a spokesman for U.S. Central Command, said in a statement.

“The United States does not seek to fight the Russians, the government of Syria or any groups that may be providing support  to Syria in the Syrian civil war,” Ubran said. “The U.S. does not require any assistance in our efforts to destroy ISIS.”

U.S. forces have in the past launched several deadly strikes against forces aligned with Syrian President Bashar Assad for violating the At Tanf base’s deconfliction zone.

The attacks included the downing of a suspected Iranian drone in June. The drone had attacked coalition forces conducting a joint patrol with partner forces near the At Tanf garrison, according to Col. Ryan Dillon, the spokesman for Operation Inherent Resolve.

“It was clearly meant as an attack,” Dillon said. The bomb missed its intended target, but “proximity made it clear who they were trying to hit.”

The Trump administration last week warned Syria, Russia and Iran not to launch an offensive in Idlib province, the last remaining anti-Assad rebel stronghold, over fear of mass civilian casualties.

President Donald Trump tweeted: “President Bashar Assad of Syria must not recklessly attack Idlib Province. The Russians and Iranians would be making a grave humanitarian mistake to take part in this potential human tragedy. Hundreds of thousands of people could be killed. Don’t let that happen!”

Trump’s warning appeared to have been ignored after Russian jets began bombarding Idlib.

“We consider any assault on Idlib to be a dangerous escalation of the conflict in Syria,” said U.S. ambassador to the United Nations Nikki Haley. “Airstrikes by Russia and the regime have already begun against civilian areas. The atrocities committed by Assad will be a permanent stain on history and a black mark for this council which was blocked over and over by Russia from taking action to help.”