There is probably not an adult in America who hasn’t experienced having someone cut in line.

It’s exasperating not only because it’s fundamentally unfair, but because it’s highly disrespectful of those already waiting. More confrontational personalities will tell the person to go to the end of the line. Others will say nothing. 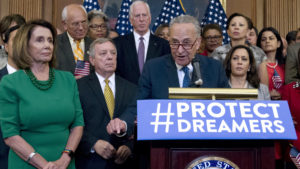 Would it make you feel any better if the line breaker walked his cute teen-aged daughter to the front of the line and inserted her after you’ve been waiting an hour? It would be a deft move, intended to disarm you, but it would still be wrong. You might be less inclined to get aggressive with the young girl, but you still would not like it.

That, in a nutshell, is DACA—Deferred Action for Childhood Arrivals.It is adult illegal immigrants using their children to cut in line.

There are closely analogous situations when we allow people to automatically go to the front and we don’t object. We don’t complain when pilots and flight attendants breeze past us to get on a plane. None of us grumbles when a handicapped person gets a reserved parking place while you’ve driven around the parking lot three times.

We do make exceptions, but not in cases where someone has done something wrong or illegal to put themselves at an advantage.

There is appeal to the argument that minor children who came to America illegally under their parents’ authority should not be punished. However, they shouldn’t be rewarded either. Allowing them to stay and obtain a work permit brings with it other advantages. Some colleges, for example, brag about the number of “Dreamers” they have enrolled and the scholarships awarded to them.

The flip side is that since no school has unlimited enrollment and funds, American citizens are deprived of scholarship money and seats in the classroom.

There is even a subtle insult to American students when we call the children of illegal immigrants “dreamers.” The children of Americans dream too, but they elicit no special legal or societal “compassion” to help them fulfill their dreams.

In fact, illegal immigrants’ children go to the front because their parents did something wrong. That is the sum and substance of it. Your parents brought you here illegally, and we are going to reward you for it.

That may seem a harsh analysis, but would we allow the cute teenager to stay in the front of the line because a parent inappropriately placed her there? Or would we say to the child of a convicted felon, since your parent committed a terrible crime, we are going to give you advantages which you would otherwise not have? What about the child of the parent who worked hard and obeyed the law all of his life? The logical conclusion of this thinking is that the child of a law-abiding American is not worthy of special treatment, but the child of a parent who broke the law is. Viewed from this perspective, DACA fails the tests of both logic and morality.

President Obama said no less than 22 times that it would have been unlawful and unconstitutional for him unilaterally to revise the statutory rules regarding treatment of illegals. He then went ahead and did the very thing that he declared unlawful. He knowingly trespassed into a realm reserved for Congress. Legislative inaction is no excuse for presidential lawlessness.

President Trump and Attorney General Jeff Sessions are being pilloried as “cruel” for phasing out DACA, which President Obama forced on the nation in June 2012. In fact, they’re showing compassion for us all by restoring the rule of law.

Accusing opponents of lacking compassion is a well-worn tactic of the Left. Our hearts, of course, go out to these children, but their parents bear the shame and responsibility for putting their children at risk. Who could forget the tens of thousands of unaccompanied children from Central America making their way across Mexico, being robbed, raped, or murdered on the journey?

A truly compassionate society exists only where the rule of law prevails. Otherwise, human nature descends into anarchy, might makes right, and the strong oppress the weak. A lawless society is the antithesis of compassion.

The Trump Administration is upholding the Constitution and the rule of law. It’s the right thing to do, and every American citizen should support it. Now it’s up to Congress to be responsible and accountable to the people.

E.W Jackson is a nationally syndicated radio host on American Family Radio & Urban Family Talk and was in 2013, Republican Nominee for Lt. Governor of Virginia.

DACA, Dreamers, illegal immigrants’ children go to front of line because their parents did something wrong, WorldTribune.com