‘I don’t think the country is going to stand for it much longer’: Fox deletes Trump’s election comments

The powers that be at Fox News edited out some of the most newsworthy comments made by former President Donald Trump made in an Aug. 7 interview with host Dan Bongino. 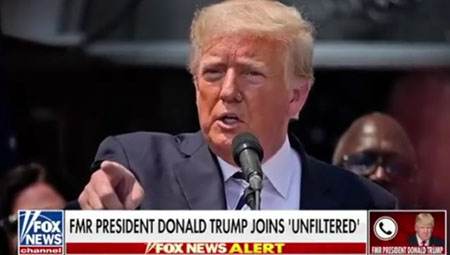 Among other key comments that were deleted, Trump said: “You have a Fake Election, you have an election with voter abuse and with voter fraud like nobody has ever seen before and based on that and based on what happened they are destroying our country…”

Trump added: “I don’t think the country is going to stand for it much longer.”

Bongino responded in a Parler post, saying: “I was not made aware of ANY edits made to my interview with President Trump on the Fox News YouTube account. I’m looking into this right now and I will provide a full account of what happened.”

Bongino added: “Also, it’s disturbing that I wasn’t even contacted BEFORE this tweet was sent out to determine who did this, and why. I’ve been a staunch ally to President Trump from the beginning, even when others sold him out. And I have the receipts to back it up.”

Following Bongino’s post, Harrington added a clarification: “This had nothing to do with @danbongino. The interview happened to be on his show. Dan is a great friend of America First. It was @FoxNews who cut out President Trump’s statement about the Fake Election, just like they have cut out coverage of election fraud ever since.”

WOW. So I went to post a clip from President Trump’s great interview from @FoxNews last night, and lo and behold, Fox News EDITED and CHANGED what President Trump said, censoring out 45 accurately describing the Fake Election.