How sharp is ‘basement Joe’? People are talking

The mental acuity of America’s 46th president has become a topic for discussion. Some say Joe Biden has a stuttering problem, and nothing more. He is on the ball, a “healthy septuagenarian” and has fought his way through many medical problems.

His fans say he is fully capable of serving as President and endorsing his agenda and reading statements and holding news conferences.

On the other hand, Biden is not only living up to his reputation as the “Lamborghini of Gaffes,” he also is providing evidence that he is not mentally equipped to handle the work of America’s President. 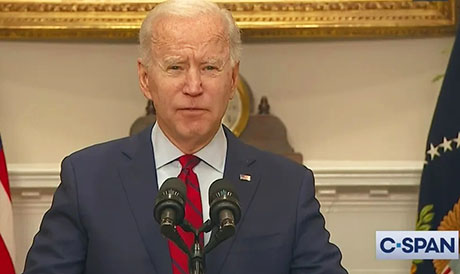 His failure to recognize the mounting crisis on the southern border which he has personally created is disturbing. His plans to spend trillions of tax dollars on the green new deal, and on social programs to stamp out systemic racism, all funded with immense tax increases, is also alarming. Surely it must suggest to even his most ardent followers that something in that head is not working on all cylinders.

America’s southern border is wide open and the best and the worst are pouring over the sands and the Rio Grande, guided by the Mexican cartels, and President Biden owns the mess. Thousands and thousands of children from toddlers to the teens walk alone across the border, often wearing tee shirts thanking Biden for the invitation. Those that have the Covid-19 virus are being put up at hotels or in army barracks or simply sent on their way into the cities, towns and villages of the country, and allowed to mingle unobtrusively with Americans.

Biden yammers over and over about enforcing the “mask mandate” which he seems to think is a cure-all for every problem of the pandemic and even of the “challenge” at the border. We bring in refugees who need a home because “that is who we are,” boasts Biden, wearing his double black mask.

Since taking the office of president on January 21, Biden has held one news conference in which he demonstrated his mental agility as he responded to questions. He read from prepared scripts provided to him by his “advisers.” He took about 10 questions from standouts of the left wing press who prefaced inquiries by noting what a “good and moral man” he was. Questions from Fox News or other conservative reporters were not allowed.

His performance as President shows clearly that he is fumbling mentally, and I am guessing that millions believe that “slow Joe” will never complete his four- year term. There is a general belief that Vice President Harris, who is believed to be assigning many of the liberal policies now pushed by the President, eventually will take his seat in the Oval office. Probability is that Biden will resign as President with nudging from the party faithful, or that he will be removed via the 25th amendment which will be promoted by the vice president and the cabinet members.

Can we accept the judgment of Biden’s mental fitness as described by retired Navy Admiral, Ronny Johnson, now a United States Congressman from Texas. Before election to Congress, Johnson, a Republican, was the personal physician for Democrat Obama, and Republican Trump between the years 2013 to 2018. No one had the opportunity which Johnson had to observe Biden in action as a Vice President and later in his campaign and during his early months as President.

In interviews, Dr. Johnson has noted, that while he was around the upper level of government with both Obama and Trump, he was not the personal physician to Vice President Biden. However, said Johnson, he saw and had dealings with the vice president many, many times, and his mental capacity has diminished. Basically, said Dr. Johnson, the new President simply does not know what he is doing.

After Biden fell on the steps of his plane, Johnson tweeted that “I served as White House physician under two presidents. I’ve seen what it takes physically and mentally to do the job.” I can tell you tell you right now, he added, that the way Biden hid in his basement and avoided conferences… is a “major red flag” that something with Biden is not right!

Dr. Mark Siegel has been a Fox News contributor. Asked about Biden’s cognitive ability, Dr. Siegel said Biden needs to have a mental assessment test. ” I cannot opine on his mental state, but I have seen him and heard him talking, and believe that he should undergo a cognitive examination.”

In one public comment, Biden has referred to his Vice President as “President Harris,” and just recently he forgot the name of his Secretary of Defense ( Lloyd J. Austin III) and said, “I want to thank the Sec…., the ah former general. I keep calling him general, but my, my — the guy who runs the outfit over there.”

During his presidential campaign, Biden noted that he was a candidate for the United States Senate. Just a little gaffe, something he is famous for?

Victor Davis Hanson, 67, of the Hoover Institute is a highly respected professor and historian whose opinion is sought after and who has published books and written articles and opinion columns in many magazines and papers, including the New York Times, Wall Street Journal and Washington Post. Hanson has opined that Joe Biden has had trouble finishing a sentence. “To him, names are vague eddies in his mind’s river of forgetfulness. He is in a far more dire mental state than a physically failing FDR was in the months before his death.”

Some analysts have said that President Trump was “un-grammatical.” Compared to Trump, said Dr. Hanson, Biden is “a-grammatical” — he simply streams together half-thoughts without syntax and then abandons the sentence entirely.

Those traits do not necessarily assess his full brain power and cognitive ability. As to that, Hanson added that “Joe Biden is tragically suffering a mental eclipse and sliding away at a geometric rate. Each scripted, canned and rehearsed appearance offers proof that Biden “is cognitively unable to be president or indeed to hold any office.”

Leo Terrell, a widely known and admired California civil rights lawyer and now a Fox News contributor and a radio host, has said that President Biden has done nothing for the black community except insult it. But aside from that, “I look at him and know he does not know what he is doing. There’s something wrong there.”

Just prior to the election last November, a poll reported that one out of three Americans believe that Joe Biden is cognitively impaired. Some believe that that percentage today is much, much higher.

Can everyone be wrong?

How sharp is ‘basement Joe’? People are talking, WorldTribune.com