Grounds for American optimism in times that require courage

“A policy of strategic ambiguity” is a striped-pants way of saying “keep your opponent guessing”. It can also be a Foggy Bottom euphemism for lack of policy or not knowing what to do in a difficult situation.

It has the advantage of keeping your opponent off balance, never quite sure what your intentions are, and therefore making it more difficult for him to formulate a policy of his own or to implement one to counter your strengths. But it can also be dangerous because it may just lead your opponent into misinterpretations of your unstated basic interests and possible reactions when you cannot in the end tolerate their being further eroded and …bang! World War I, II and … 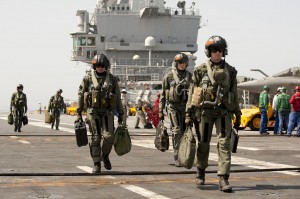 Alas! We are in that situation on a number of different fronts today. Some of them long in the making, but some a direct result of “leading from behind”, the Obama administration’s own peculiar version of strategic ambiguity. That has proceeded from a public policy of apologizing and denigrating American actions of the past and abdicating the role of world leader established with the U.S. and Allied victory in World War II.

It’s also a projection of a denial of a long-held American concept — that, because Americans do not owe their origin to a single race, a single ethnicity, a single religion, a single all encompassing motivation, the Republic was built on an ideological concept.

Whether in the Founding Fathers’ words, or in those of Abraham Lincoln’s Gettysburg Address, Americans believed they had a unique reason for existing [the French call it raison d’etre]. In a sense, it doesn’t really make all that much difference if this belief in “American exceptionalism” were true or false, it has been fundamental to holding the country and its society together in pursuit, often, of very difficult if laudatory goals.

True, the current American situation arises from its relative and perhaps objective weaknesses. The U.S. economy has short-term and long-term problems which may be greater than at any time since the worldwide Great Depression of the 1930s. Public opinion on so many issues is as deeply divided as it is has ever been, even in moments of great disarray such as on the eve of War Between the States.

Dealing with the continuing technological revolution has spiked with the arrival of digitalism in all its forms, challenging American political, social and economic ingenuity as it has not been challenged since the coming of industrialization and the great Western expansion of the 19th century. Self-criticism and self-mockery, always welcome in any free society, have reached outrageous proportions, imperiling concepts of basic values of self-control and discipline that any society must have to maintain its values.

But, to change our metaphor, the glass is only half empty. America, still, after 300 years of exploitation remains an incredibly rich environment — notably our vast farmlands that dwarf the arable areas of other nations, perhaps even continents. Our mineral and energy resources — as the shale revolution most recently has revealed — with our vast coal deposits waiting for new technologies to utilize are still unique.

Pick up a small weekly in any part of the country and you see the volunteer genius the French historian Alexis de Tocqueville recognized as the treasure of American democracy is still alive and well in the myriad local associations, whether religious or secular. Immigrants still flock through the golden door and strengthen our own native talents as Silicon Valley continues to exemplify. Our unsurpassed military not only for its spirit of sacrifice and nobility of spirit but in its ability to improvise in unfamiliar circumstances is if nothing else an expression of all these assets.

With the likelihood of the coming crash of the Euro with all its implications for our mother civilization as well as the direct effects on our own economy, the chaos overtaking the Middle East where unfortunately we can not ultimately avoid decisions, and the growing disenchantment with what had seemed to be miraculous economic advancement in East and South Asia, it is well to recall this as we formulate policies rather than choosing the strategic ambiguity option.

As one of his critics said to John F. Kennedy, referring to his book commenting on leadership, what we need right now is a little less profile and a bit more courage.