Leftists in the media “who only speak to and for one another, always believe that the primary if not sole metric of journalistic credibility is how popular one is among other” leftist journalists, independent journalist Glenn Greenwald noted.

Greenwald co-founded The Intercept in 2013, but resigned from the outlet in October 2020 after editors demanded, and he refused, to remove all portions of an article that were critical of Joe Biden. 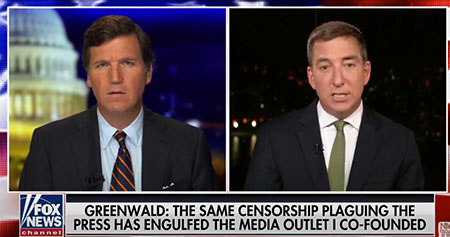 Greenwald wrote at the time: “But the pathologies, illiberalism, and repressive mentality that led to the bizarre spectacle of my being censored by my own media outlet are ones that are by no means unique to The Intercept. These are the viruses that have contaminated virtually every mainstream center-left political organization, academic institution, and newsroom. I began writing about politics fifteen years ago with the goal of combating media propaganda and repression, and — regardless of the risks involved — simply cannot accept any situation, no matter how secure or lucrative, that forces me to submit my journalism and right of free expression to its suffocating constraints and dogmatic dictates.”

In the media atmosphere of 2021, leftist news outlets such as The Intercept “are trying to create a blatant double standard where they can smear anyone’s reputation they want and attack anyone they want, while demanding a shield of immunity from criticism by threatening to accuse anyone who criticizes them of ‘endangering’ them,” Greenwald noted in a May 21 analysis in which he responds to a Washington Post article and the Daily Beast’s questions about accusations from The Intercept that he had somehow “endangered” their writers..

Washington Post propagandist Paul Farhi, who independent analysts note routinely equates reporting that doesn’t originate from leftist opinion factories to white supremacist Q-Anon America Firsters, raked Greenwald over the coals for his criticism of The Intercept’s recent attacks on him.

“Among other things, that Post article features The Intercept’s ongoing attempt to depict me as mentally unwell in order to delegitimize my criticisms of their shabby journalism,” Greenwald noted.

Farhi’s piece quotes The Intercept’s editor-in-chief, Betsy Reed, as saying Greenwald had lost his “moral compass and grip on reality.”

This, Greenwald noted, echoed The Intercept’s prior claim that “mounting anger at their organization is being fueled not by widespread revulsion over their increasingly unethical and politicized journalism but rather by my ‘unbalanced tweets.’ The Post also quotes Reed as claiming that I have ‘done a good job of torching [my] journalistic reputation.’ ‘He’s a huge bully,’ ” she added.

One of the Intercept stories to which Greenwald, “and many others” objected involved a fund-raising email sent by The Intercept to the public on May 4 in which The Intercept boasted that it had obtained the full archive of private data on all users of the social media platform Gab.

“The Intercept vowed that they would use the data archive to target ordinary citizens, including QAnon conspiracy theorists and those who believe that the election was defrauded,” Greenwald noted.

A former senior Intercept editor forwarded the email to Greenwald, saying that The Intercept was now doing the work of the NSA and FBI by infringing privacy rights rather than protecting them.

Greenwald tweeted: “This is repulsive. The Intercept was founded during the Snowden story to defend privacy rights & oppose the security state. Now, the liberal DNC hacks who “edit” it are boasting they got personal data from Gab users & are sorting through it, doing FBI’s work to find “extremists.”

In the emails, The Intercept not only revels in being snitches but also solicits donations from the public.

“Why an outlet lavishly funded by the world’s 73rd richest billionaire and which provides their largely unread writers and editors enormous, above-market salaries has to beg for donations from the public in the middle of a pandemic and joblessness crisis is, as I understand it, the subject of an imminent investigative exposé on their finances,” Greenwald noted.

Greenwald was also critical of an Intercept story, in the form of a 20-minute video narrated by former New York Times live-blogging reporter Robert Mackey, which was “designed to vilify numerous journalists with small right-leaning news outlets who do the work that The Intercept would never get near: namely, they report on what actually happens at Antifa protests.”

The Intercept, Greenwald pointed out, has a $15 million/year budget and works from a $3 million/year penthouse office on the 18th floor of a Park Avenue tower offering panoramic views of Manhattan, and pays their senior employees annual salaries between $350,000 and $450,000.

So why would such an outlet “devote their vast resources to villainizing obscure, poorly paid video journalists who — unlike most Intercept reporters — do actually dangerous, on-the-ground reporting?” Greenwald wrote. “Who is the ‘bully’ in this situation?”

Greenwald continued: “The primary grievance which The Intercept is voicing in response to my criticisms of their work is the same one which liberal outlets now constantly try to weaponize in order to place themselves off-limits from criticism: namely, that by criticizing Intercept writers, I have ‘endangered’ them — a dangerous and shabby standard which, like their liberal media brethren, they obviously do not apply to themselves.

“Why can The Intercept use a billionaire’s money to expose ordinary people’s Gab activities and produce a video smearing multiple journalists such as Townhall’s Julio Rosas and The Daily Caller’s Jorge Ventura, but I and others cannot criticize them? Numerous other journalists and commentators, including Matt Taibbi and Jimmy Dore along with Fox News and the other news outlets whose journalists were smeared by The Intercept, along with the targeted journalists themselves, voiced the same criticisms I did.”

Greenwald said he was contacted by Daily Beast media reporter Lloyd Grove, “who asked me to respond to a long list of accusations, smears and other attacks furnished to him by various Intercept reporters and editors — in order, again, to pretend that I was their only critic, driven by mental problems. These accusations conveyed by Grove were similar to the ones they fed to The Post.”

Greenwald posted the full written exchange he had with Grove.