In one of many heated exchanges with Republicans during his testimony before the House Judiciary Committee on July 12, anti-Trump FBI agent Peter Strzok said he didn’t “appreciate” how Rep. Trey Gowdy was characterizing the agent’s removal from special counsel Robert Mueller’s team.

“I don’t give a damn what you appreciate, Agent Strzok,” Gowdy responded. “I don’t appreciate having an FBI agent with an unprecedented level of animus working on two major investigations during 2016.” 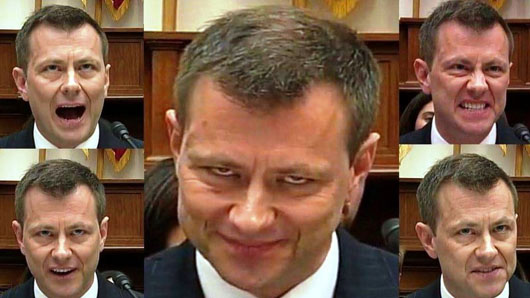 Strzok remained defiant throughout his testimony, insisting he did not show bias in anti-Trump text messages he exchanged with former FBI lawyer Lisa Page. Strzok was the FBI’s lead investigator on the Trump-Russia investigation, and was having an affair with Page, at the time the texts were sent.

Related: Strzok was moving to fast-track Russia investigation as he texted vow to ‘stop’ Trump, June 18, 2008

Gowdy had slammed Strzok at the opening of the hearing, saying the agent showed “textbook bias” on the job. Strzok claimed in his defense that he was kicked off Mueller’s investigation because of “perception,” not because of bias.

“Before he ever begin investigating alleged collusion between the Trump campaign and Russia, he’d already made up his mind that President Trump would be destabilizing for the country,” he said. “And he hadn’t even begun to interview the first person in August. He said, we will stop it. We need an insurance policy, and then he began talking about impeachment one day after Bob Mueller’s investigation began.”

Committee Chairman Bob Goodlatte had issued a contempt threat against Strzok after he refused to answer Gowdy’s question on “how many witnesses” Strzok interviewed before an August 2016 text from Strzok to Page stating “we’ll stop” then-candidate Trump from becoming president.

Strzok said he was not able to answer the question based on instructions from FBI counsel.

“Mr. Strzok, you are under subpoena and required to answer the question,” Goodlatte said.

Goodlatte added that, at the conclusion of the hearing, Strzok would be subject to “recall to allow the committee to consider proceeding with a contempt citation.”

Hours later, after a break in the hearing, Strzok returned to say that he was advised by FBI counsel that he could answer Gowdy’s earlier question.

After Gowdy asked it again, Strzok replied: “I don’t recall. I’d have to check the case file.”

Gowdy responded: “That’s eerily similar to what you said a couple of hours ago. I’m looking for a number. You don’t recall interviews conducted in the first week of an investigation you originated?”

Strzok maintained that he did not remember, leading to the exchange ending with Gowdy saying “I don’t give a damn what you appreciate, Agent Strzok.”