All 50 Republicans went in against the so-called “For the People Act,” leaving it 10 votes shy of the 60 needed to overcome the filibuster and advance the legislation which Democrats rammed through the House in March. 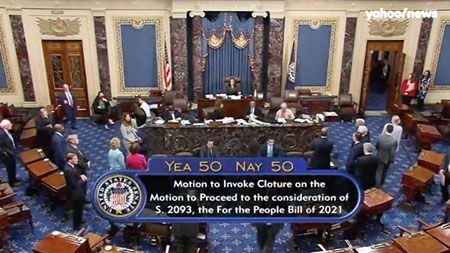 “While the immediate cause of death was a Republican-led filibuster, the legislation, which sprawled across more than 800 pages of text and would have overridden state election laws across the country, collapsed under the weight of its own liberal tilt,” The Washington Times’ Kary Murakami wrote.

Maine Republican Sen. Susan Collins, a “centrist” who Democrats hoped to prod to support the legislation, said: “This is a bill that was introduced to enhance partisan messaging, not to enhance participation in our elections, as the over-the-top rhetoric around this bill highlights.”

Another so-called Republican “centrist,” Sen. Lisa Murkowski of Alaska, said: “Americans need to have faith in our institutions. They need to know that our elections are fair, that they are easy and accessible for all. And we can’t instill that trust with a wholly partisan effort.”

The Democrats’ move to have the federal government take over elections would have ushered into automatic voter registration for anyone using a government service; states would have had to adopt same-day registration; voting by mail was a required option; ballots could have been counted even if they arrived after Election Day; and states’ efforts to purge names from voter rolls would have been limited.

The legislation did not provide for an outright ban on voter ID, “but imposed a national workaround for those without ID that is more lenient than laws in most of the 30 states that require identification,” Murakami noted.

Licking his wounds from the devastating loss for Democrats, Senate Majority Leader Chuck Schumer slammed Republicans for derailing the For the People Act: “Voter suppression has become the official platform of the Republican Party,” Schumer said moments after the defeat. “There is a rot at the center of the modern Republican Party. Donald Trump’s lies spread like a cancer.”

Wisconsin Republican Sen. Ron Johnson said he did not see a path toward passing any bipartisan compromise election integrity legislation prior to the 2022 midterms.

Johnson said in an interview with Just the News that Republicans want to make cheating difficult but Democrats want to make it easy.

Johnson described the For the People Act as an “Orwellian named bill,” which in reality is about Democrats “consolidating their control over the government, which means … consolidating control over each individual Americans’ life.”

“Just about everything” in the legislation would have make it “easier for people to commit election fraud at a moment in history where what we should be doing is trying to restore confidence in the legitimacy and integrity of our election system,” Johnson said.