Gen. Flynn on ‘American Alamo’: U.S. military command could be ‘brought up on charges’

Accountability for the commanders of the U.S. military who so thoroughly botched the withdrawal from Afghanistan could include being brought up on charges, Lt. Gen. Michael Flynn said. 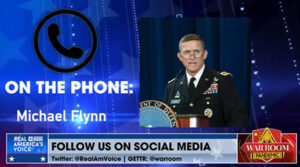 In a Friday interview on Steve Bannon’s War Room, Flynn characterized the situation in Afghanistan as “our nation’s Alamo.”

“Our nation is in a severe crisis of leadership right now,” Flynn said. “We’ve been dictated to by our enemies and this administration has succumbed to that.”

Flynn added: “As far as I’m concerned the entire chain of command needs to be fired and that starts with the commander-in-chief.