Florida Gov. DeSantis a rock star at CPAC: ‘Welcome to our oasis of freedom’

“Welcome to our oasis of freedom,” Gov. Ron DeSantis said in welcoming attendees of CPAC 2021 to the City of Orlando in the Free State of Florida. 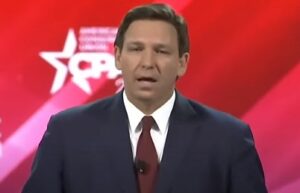 In setting the stage for former President Donald Trump’s address to CPAC, DeSantis said the GOP must not return to the “days of the failed Republican establishment.”

Trump is slated to address the conference Sunday at 3:40 p.m. (Watch the CPAC livestream here)

DeSantis decided early against oppressive lockdowns and kept Florida open. He and South Dakota Gov. Kristi Noem, who implemented similar policies, were top runners up to Trump in the annual CPAC straw poll according to results announced today.

“While so many governors over the past year have kept locking people down, Florida lifted people up,” DeSantis said. “In Florida, schools are open. Every Floridian has a right to earn a living and all businesses have a right to operate. And we are stronger as a state and much happier as a people because of this leadership.”

“Rush displayed the courage of his convictions time and time again,” DeSantis said. “Rush was one of the first to fight and win against cancel culture. Rush showed that fighting the left requires strength and that conservatism devoid of backbone is doomed to fail.”

DeSantis, who ordered flags to be lowered to half-staff in honor Limbaugh, referred to the radio host as “one of our greatest field generals” in the battle for conservatism.

“So at this moment in our history, and I think Rush showed us this, but particularly now, standing for the right things comes at a cost,” DeSantis said. “You may be attacked, you might be smeared, you may even be canceled by the major organs of the political left … When the Left comes after you, will you stay strong or will you fold?”