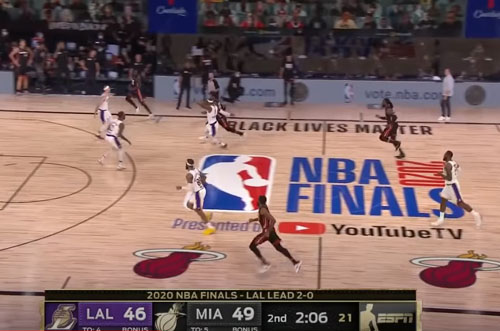 According to ShowBuzzDaily.com, Sunday’s Miami Heat-Los Angeles Lakers match-up averaged a paltry 4.395 million viewers at its highest point of the night on ABC as the Heat won, cutting LA’s series lead to 2-1. Game two previously set the record low for the NBA Finals with an average of 4.5 million viewers. Game one also hit a record low.

By comparison, the Sunday night NFL game between the Philadelphia Eagles and San Francisco 49ers averaged more than 12.4 million viewers at its highest point.

“We might never know all the reasons for the ratings being in the gutter, but I promise you some people have turned games off because things have simply gotten way too political,” the Daily Caller’s David Hookstead noted. “It’s no longer just about winning and losing. Everything has to be about lecturing the audience! LeBron James and the league have gone woke, and people aren’t impressed at all.”

A Sept. 2 Harris poll found that 39 percent of respondents who identified as sports fans felt that the NBA was too political. And another 19 percent said that they had turned off pro basketball because of the NBA’s deep links to China.

“Killing the NBA’s popularity in the US will be LeBron’s legacy. Didn’t have to be this way. Sad. Can’t be the GOAT if you kill the game,” Whitlock tweeted on Oct. 1.

OutKick’s Bobby Burack noted that the NBA is loaded with players “who claim to put human rights ahead of their dollars” but “are still earning millions from the Chinese Communist Party.”

“No comment,” that’s how James responded to the shooting of two police officers in Los Angeles, Burack noted.

“On the other hand, LeBron is changing America — literally. His organization is texting random Florida citizens to pay for felons to vote (for Joe Biden) in the upcoming election.”

Burack concluded: “Where does the NBA turn to save its ratings? Nowhere. It will take years to undo an identity that only welcomes those with the same extreme views based on everything but facts. Which, clearly, isn’t that many people.”