On July 9, two Republican-appointed judges on the 5th Circuit Court of Appeals pressed attorneys representing Democratic attorneys general about whether lawmakers intended to invalidate the entire law when Congress eliminated the penalty for the individual mandate. 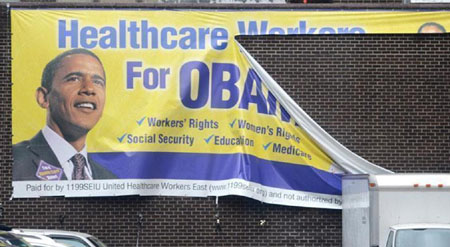 “The issue is whether the mandate can be separated from the rest of the law, which extends far beyond just health insurance,” The Hill noted in a July 9 report.

It was not clear if the 5th Circuit judges were ready to uphold a federal judge’s earlier decision invalidating the entire law.

The lawsuit, which is supported by the Trump administration, is expected to eventually move to the Supreme Court, which has twice saved Obamacare.

Under the mandate, Americans who did not buy health insurance had to pay a financial penalty, a provision the U.S. Supreme Court upheld in 2012 by calling it a tax.

The Republican attorneys general who filed the suit argue that the decision by Congress to scrap the individual mandate penalty in the 2017 tax cut law rendered Obamacare unconstitutional because the Supreme Court previously upheld the mandate as a valid exercise of taxing power. Congress lowered the penalty for not purchasing health coverage to $0, but the mandate remains on the books.

“If you no longer have the tax why isn’t [the mandate] unconstitutional?” said Jennifer Elrod, a judge appointed by President George W. Bush.

The lawsuit was brought by 20 Republican state attorneys general, though that number is now down to 18 after Democratic governors took over in Maine and Wisconsin after November’s midterm elections.

Robert Henneke, who represents a set of private business owners who are on the case as plaintiffs alongside the GOP states, said he was optimistic about the outcome.

“The trial court ruled in our favor, and it did not seem that the Fifth Circuit panel really had much disagreement with that,” Henneke said.

The court is expected to rule in the coming months.

Attorneys for a coalition of Democratic states and the House of Representatives argued that Congress did not want the Affordable Care Act to collapse when it eliminated the individual mandate penalty as part of the 2017 GOP tax law.

Senate Majority Leader Mitch McConnell on July 9 said Congress would act “quickly, on a bipartisan basis” to restore preexisting condition protections if the courts struck them down.