UNITED NATIONS — “Migration is not the solution to demographic problems,” warned Katalin Novak, Hungary’s Minister of State for the Family.

Though conceding the European continent faces a significant “demographic decline” and the undertow of a falling population, individual states can counter the “inevitability” through focused family friendly policies such as those being pursued in her Central European country.

“In Europe we face population decline, and imagine in the European Union there is not a single member state where the fertility is sufficient to maintain the population. In each and every member state it is below 2. It is as if we have lost our capacity to maintain our population. That is also the situation in Hungary with a population decline since 1981. Thus for three and one-half decades we have lost over ten percent of our population, approximately 850,000 people.” 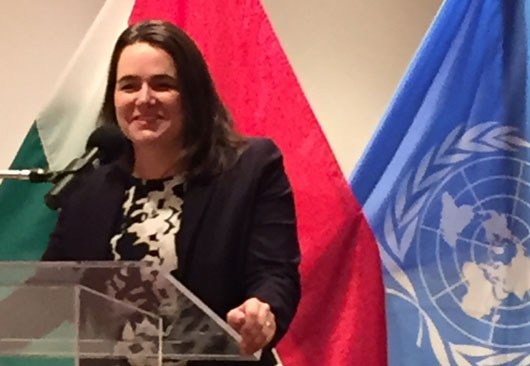 In an interview with this correspondent, Minister Novak, the highest ranking woman in the center-right Hungarian government speaks proudly as the mother of three children. She was visiting the UN for activities related to the Commission on the Status of Women.

Hungary’s population is below ten million. “At the lowest in 2011 the fertility rate was 1.23 now it’s 1.5, “ said Novak, adding, “But you know what we inherited it is very hard to overcome. In Europe many leaders speak of migration, ‘Europe is the continent of empty cradles, so why not bring in migrants?’ But Hungarians are not ready to do this. When you ask young people, they say they want to get married and to have children.”

The European statistics agency Eurostat says that 1.58 remains the EU average fertility rate. In Germany the rate is 1.5, in Italy 1.35 and in Spain 1.3.

So what are the Budapest government’s goals? She stressed, “The goal is 2.1.” But when asked if this is too ambitious she retorted, “If you start by Plan B, you will fail. You have to have ambitious goals so that you can really overcome this situation. We have made progress. In just six years the fertility rate has increased by 20 percent.”

Minister Novak concedes that Hungary aims at reaching the target through Family Friendly programs of financial aid and stressing the benefits of Family Life.

Significantly, she stressed that her government has earmarked 5 percaent of GDP for a wide range of Family Policy initiatives. The spending is two times the OECD average. “This is not spending really but actually an investment in our Nation,” she added.

“We always talk about money. Of course it is important how much we invest in Families through services. But let me say it is much more the joy of having children,” Novak extolled.
“Among the Hungarian people there is a consensus that we have to spend a lot of money on, invest really, in our future”. The main cornerstones are tax policy which favor allowances for children through creative subsidies.

Notably the government introduced a housing program offering a $40,000 nonrefundable benefit for couples who are raising three children and intend to purchase or build a new property.

Already by 2006, the number of elderly population matched the number of children and the ratio would have deteriorated further if it were not for the proactive policies taken by the Budapest government.

“Young people get married quite late as well. Between 2002 and 2010 the marriage rate decreased 23 percent but since 2010 now it has increased almost 43 percent.

“We have value-based policies. Being neutral is not a value. You have to hold to values. We are a value-based government,” she asserted.

A stubbornly high abortion rate during the old regime caused a notable population decline. When asked whether abortion remains widespread Minister Novak conceded “It has dropped a lot but… I believe one abortion is too much. In Hungary abortion is legal under circumstances but in our Constitution it is stated that ‘Life begins at the moment of conception.’ The life of the fetus should be protected. We protect Human life from conception.”

She stressed, “There are still too many abortions which remains a challenge for us. The abortion rate is still 31/100. It was higher during communist times.”

Minister Novak concluded, “We are a family-friendly country, that is a concept we are trying to introduce. We must show the joy and happiness of child raising.”