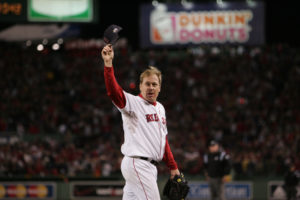 Former Boston Red Sox pitcher Curt Schilling may be warming up for a run at Massachusetts Sen. Elizabeth Warren in 2018.

Schilling, a major factor in Boston’s 2004 and 2007 World Series triumphs and Arizona’s 2001 championship, told radio host and WorldTribune columnist Jeffrey Kuhner on Aug. 15 that he was “considering a political career” and wanted to see Warren out office because “she’s a nightmare.”

The 49-year-old Schilling, who compiled an 11-2 career record in the postseason, said he was “pro life, pro Second Amendment” and a Donald Trump supporter.

Kuhner’s full interview with Schilling can be heard by clicking here.